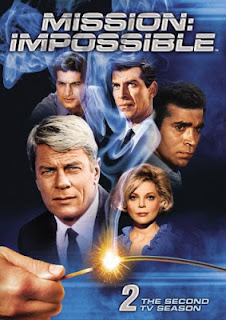 I promised a contest, didn't I? I know everybody's thinking Bond around the clock right now with the new movie and the anniversary (and I'll probably have a Bond contest or two in the next few weeks), but I'm going to shift gears for a moment to another one of my favorite spy series: Mission: Impossible! Specifically to one of my favorite seasons of that show, Mission: Impossible - The Second TV Season. (Read my review of it here.) Season 2 introduced audiences to team leader Jim Phelps, played by the incomparable Peter Graves, but retained the most classic incarnation of the team from the first season, including Martin Landau, Barbara Bain, Greg Morris and Peter Lupus. To enter to win this DVD set, all you need to do is send me an email with the subject heading "M:I Contest" including your name and mailing address by 11:59 PM, Pacific Time on Thursday, November 8, 2012.* The winner will be announced next Friday, November 9.

*The Fine Print: One entry per person, please. Double entries will be disqualified. One prize-winner will be drawn at random and announced on Friday, November 10, 2012. The winner's first name will be posted here and he or she will be notified via email. All entries will be deleted immediately after the contest’s close, and no personal information will be retained or transmitted to any third parties. The contest is open to anyone, in any country, but foreign readers should note that these are Region 1 NTSC DVDs and be sure they have the proper equipment for playback. Unfortunately, the Double O Section cannot assume responsibility for items lost or damaged in transit.
Posted by Tanner at 10:49 PM