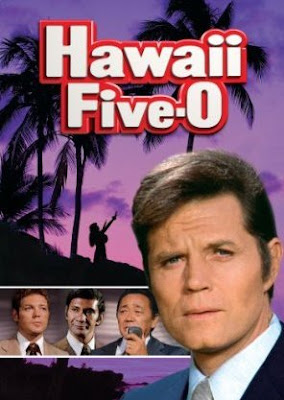 Season Six of the seminal cop series Hawaii Five-O doesn’t really have too much to offer in the way of international intrigue compared to previous seasons–other, of course, than the original Felix Leiter himself, Jack Lord, in the starring role as Steve McGarrett. For the first time, McGarrett’s arch-nemesis, Red Chinese agent Wo Fat, doesn’t even make an appearance. Usually his single, dependable guest appearance would signify a good spy plot. But he sits this season out, unfortunately. Even the top American Intelligence man in Hawaii, Jonathan Kaye, makes only one appearance this year, in the season’s most spy-like offering, "Anybody Can Build A Bomb."

"Anybody Can Build A Bomb," is, as the title implies, a nuclear blackmail episode–one of the spy genre’s most reliable chestnuts. But what all governments fear most today–and what Jack Bauer thwarts (or occasionally fails to thwart) on a regular basis on television–still seemed a more fanciful threat in 1973. And Hawaii Five-O, a pretty gritty show in general, commendably tries its best to make the notion of a homemade suitcase nuke more credible. This isn’t an outlandish Thunderball scenario involving hijacked Air Force jets, hydrofoil yachts and underwater shenanigans; it’s a homemade nuclear device in the hands of a ruthless psychopath.

The Governor calls McGarrett in for a ride in his limo one morning and shares a nuclear blackmail note he found on his door. The blackmailer, who calls himself "Mercury," claims to have in his possession "a couple of birdcages of plutonium," a piece of jargon the writers are obviously quite proud of, as we’ll hear it again and again throughout the episode. The Governor makes matters timely by sharing that at the last governor’s conference he attended, they learned that in the foreseeable future, major cities will face atomic blackmail. "I never thought it would be Honolulu!" he admits. 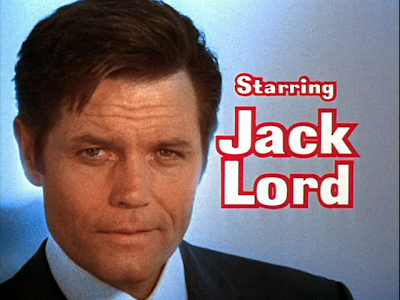 Fortunately, Jonathan Kaye is able to assign them Elias Haig, a nuclear physicist from the Manhattan Project right there in Honolulu–and one of the top men in his field. Dr. Haig has even written a book warning of this very scenario... which makes him rather suspicious. Haig delivers necessary exposition by giving a pretty good lecture on the basics of how nuclear bombs work, then as soon as McGarrett’s left he heads to his phone, dials a sinister number and confirms our worst suspicions by gravely intoning, "The pigeon is in the coop. It came on wings of Mercury. Pass the word." Weirdly, there are two episodes in a row this season where the "top man" in a given field just happens to live in Honolulu–and turns out to be the bad guy! 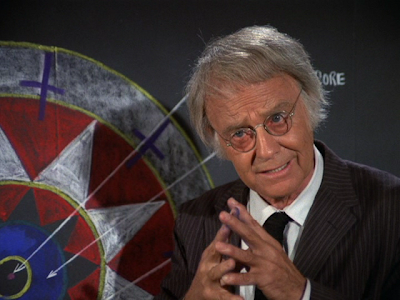 McGarrett and his team follow an intricate trail of clues (always well handled on this series) all over town, ordering bodies exhumed in no time and putting two and two together very quickly.

They dig up the body of a scientist and find he died of radiation poisoning. The coroner says he had thirteen fillings, each one "radioactive enough to burn a hole through the top of his head."

Mercury doesn’t like how close they're getting, and interrupts a meeting between Jonathan Kaye, the Governor and other Old White Men (arguing over whether or not to pay the ransom) with a new threat: to prove he means business, he’ll stage a small-scale "radioactive event" somewhere in the city. That event amounts to setting off an itty-bitty nuke in a park, but fortunately Haig has a change of heart and confines the detonation to a public restroom. McGarrett and hundreds of others cringe as the nuke goes off in the little building, safely shielded by the cinder block structure. (Hm?) Despite stretches in credibility like this one, "Anybody Can Build A Bomb" is a tense episodes, prefiguring many of Jack Bauer’s worst days. And at the end, it looks like we haven’t seen the last of Mercury. (I have no idea if this turned out to be the case or not.)

While "Anybody Can Build A Bomb" throws McGarrett up against a domestic terror threat, "A Bullet For El Diablo" treads more of the international intrigue territory. He finds himself in a political spot when Maria, the daughter of an unpopular South American dictator affectionately referred to as "El Diablo," is kidnapped in Hawaii just prior to her father’s visit. Washington makes it known that politically, finding the kidnapped girl is top priority. They don’t want an international incident. They end up with much worse, though. The kidnapping turns out not to be a kidnapping at all, but an assassination plot. Maria is substituted by a double, her illegitimate half-sister Rita, who is now working with a rebel group. Five-O believe they have rescued Maria and agree to her request to be alone with her father. That’s when lovely Rita smiles and pulls her silenced pistol. She shoots El Diablo, then unspools some hidden rope and rappels down to a lower balcony in the same hotel, where she meets her partner and immediately strips down to a bikini so that they can walk out of the hotel as tourists. An assassin who rappels away, then strips off her "innocent" attire to reveal a bikini for a getaway! Now this is spy territory! (Specifically it reminds me of Daniella Bianchi’s similar act at the beginning of the Eurospy classic Special Mission Lady Chaplin.) 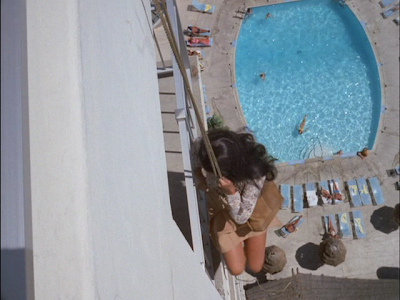 Most of the episodes in Season Six are more routine matters for the state police, however. McGarrett takes on a parade of thieves, con-men, counterfeiters, forgers, psychos and killers galore. A standout villain is an older man who’s apparently been something of a mentor to McGarrett and keeps referring to him as "Steven." Hawaii Five-O episodes have a tendency to go pretty dark, too. Even "One Born Every Minute," an episode that starts off as a con man caper, takes a grim turn halfway through.

I prefer the lighter touch, and that’s why the season finale "30,000 Rooms, And I Have the Key" was my favorite of this batch. In that one, McGarrett matches wits with a John Robie-like gentleman cat burglar and master of disguise operating in a beachside hotel. The burglar, a classy older guy named Horus who likes to do things like speak in French when he’s hanging out enjoying the finer things in life, walks deliberately into Five-O’s trap only to escape the great McGarrett. He then challenges McGarrett by sending him a very cordial invitation to his next robbery. It’s a classic game of cat-and-mouse played in the exotic setting of a Hawaiian luxury hotel. Horus always seems one step ahead of McGarrett, and you can’t help but root for him to succeed. It’s all topped off by some fantastic caper music, which serves as an assurance that this one won’t plunge into the seedier territory that this series so often embraces. 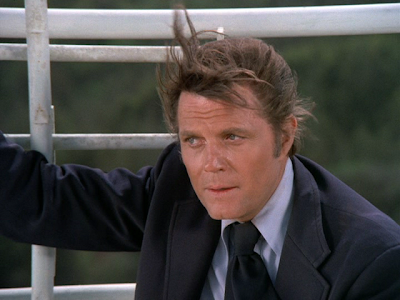 Whether you get a dark episode or the rare breezy one, though, Hawaii Five-O remains a quality program in its sixth year... which turns out to be just halfway through its epic, twelve-year run! But if you’re seeking Seventies spy shenanigans, this season isn’t right for you. Save your money for next week’s Mission: Impossible: The Sixth TV Season, also from Paramount, which offers up a good deal more than that wrapped up in the same inescapable garish fashions that defined that decade. As for Hawaii, well I’m looking forward to the return of Wo Fat in Season Seven. I missed him and his espionage in this set.

Poor Lew Ayres! He played the governor of Hawaii in the H5O pilot and now he's relegated to mad scientist status and with a frightening toupee, to boot! He was a great actor, and in the 1930s he had the good fortune to be married to Ginger Rogers during her prime.

Glad to see you're writing about Five-O again, as I missed your reviews of S4 and 5--very little espionage in those seasons, as well.