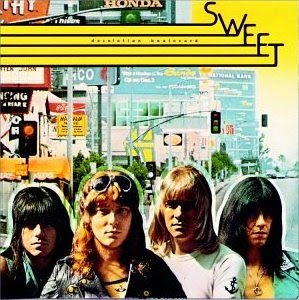 This really is a random one! I'm a big fan of Seventies glam rock: Bowie, Eno, Roxy Music, Iggy Pop, New York Dolls, Lou Reed, Mick Ronson, Steve Harley, Suzi Quattro, Slade and, of course, The Sweet. Pretty much the lot. The Sweet (of Ballroom Blitz, Fox on the Run and The Six Teens fame) have split off into different factions over the years. Pretty much each of the original members at one time or another have fronted their own version of the band. There are currently two incarnations touring: Steve Priest's Sweet, who are playing the House of Blues in Hollywood tonight and which I would be seeing if I wasn't stuck home sick (and which prompted my Sweet-related web surfing today to begin with) and Andy Scott's Sweet, who are playing tonight somewhere in Germany. Andy Scott has a blog on his band's website, where he professes his love of James Bond. And I just found this random enough to warrant a mention. I mean, it's kind of weird to me that a shaggy glam rock musician in many ways responsible for the whole hair metal look of the 80s would write, "I always connected with Bond and therefore as a fictional character this was how I perceived myself." Weird... but cool! On his blog, Scott laments that he's feeling more like Blofeld than Bond these days (which gets him down), but also reveals that he owns first editions of almost all the Fleming novels:

I have a lot of books in my house, almost a library or a bookshop. I have also realised that many are unread which is unforgivable. So to put things right I am setting about this task by reading the John Gardner “Bond” books and this has left me with a dilemma. I read the original Ian Fleming novels in the 1960s and have subsequently returned to them on a regular basis so much so that I now have them as 1st editions (all bar Casino Royale, you would need a small fortune to buy this book). I always connected with Bond and therefore as a fictional character this was how I perceived myself (Bond, Sherlock Holmes, Number 6 etc) so why am I feeling more like Blofeld?

If you're intrigued, click here to read his entire post and find out why he's feeling more like Blofeld! (Hint: it has something to do with a cat.) I know there aren't too many readers who will even be interested in this item, but I'm always fascinated when two of my own disparate interests come together in weird ways, so I had to share. Anyway, I hope Andy Scott enjoys the Garner novels, and decides to move on to Benson, Higson and Weinberg!
Posted by Tanner at 2:30 PM