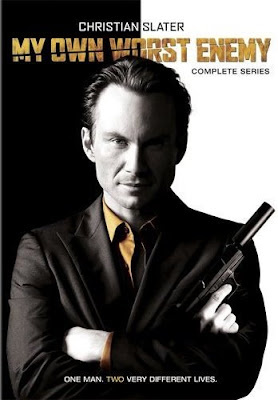 Christian Slater's Jekyll-and-Hyde-meets-Jason-Bourne spy show My Own Worst Enemy hits DVD today as a prematurely Complete Series from Universal. Retail is just $29.99 for the two disc set, which includes all nine episodes. Also out today is Paramount's Hawaii Five-O: The Sixth Season, but this season doesn't have much to offer in the way of spy episodes, I'm afraid. Still, it is a pretty terrific cop drama if that's up your alley, and it does, of course, star the original Felix Leiter, Jack Lord.
Posted by Tanner at 11:05 PM