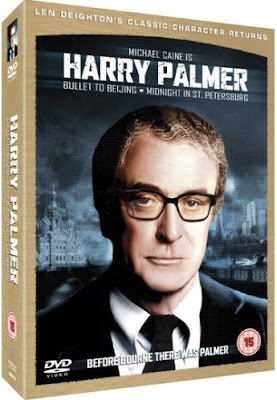 Kees from the web's definitive Harry Palmer Movie Site has alerted me to a new release in England of the two 90s, Harry Alan Towers-produced Harry Palmer sequels. On April 20, Starz Home Entertainment will release The Harry Palmer Double Bill including Midnight in St. Petersburg and Bullet to Beijing, both starring Michael Caine and Jason Connery. While it was definitely cool to see Caine return to this wonderful character three decades later, the movies are pale imitations of the originals. It's the difference between, well, a Harry Saltzman production and a Harry Alan towers one. But they've got good casts (including Michael Gambon and Sue Lloyd) and completists will definitely want to pick them up. Furthermore, this looks like the highest quality release in an English-speaking country of these titles. (In America, all we've gotten are inferior bargain basement releases.) The artwork reflects the Swedish art.
Be sure to swing by Kees' site, as he's given it an attractive overhaul recently. On top of that, it's a great resource for any and all things Harry Palmer.
Posted by Tanner at 5:53 PM

Thanks Tanner!
BTW: Watch the slogan they added on the box
"Before Bourne there was Palmer"

Oh yeah! That's right; I meant to point that out. Because... OBVIOUSLY Caine's middle-aged take on Palmer is the perfect thing for fans of Damon's frenetic Bourne flicks!