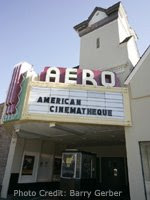 It's been over two years since the successful festival of Connery and Lazenby Bond films at the American Cinematheque's Aero Theater in Santa Monica, CA, and finally--as promised--James Bond is returning! From May 1-3, the Aero will screen "The Best of James Bond: Agent 007." Unfortunately, this isn't the Roger Moore festival that was promised at the end of the 2007's successful run of Connery films, but another festival consisting mostly of Connery films. Don't get me wrong; I love all the Connery Bonds; it's just that they screen pretty often in revival houses and the Moore ones do very rarely. But the good news is there is one night of Roger Moore movies, a double feature of The Spy Who Loved Me and Live And Let Die on Sunday, May 3 at 7:30. (I'd have rather seen the even rarer For Your Eyes Only and Octopussy, since those never play, but I'm certainly happy to see Moore's best and his first.)

The mini-fest kicks off on Friday, May 1 with Dr. No and From Russia With Love starting at 7:30. Saturday brings us the ubiquitous Goldfinger and Thunderball, also beginning at 7:30. And Sunday wraps things up with Sir Roger. Complete James Bond Movie Encyclopedia author Steven Jay Rubin (who also hosted the 2007 event) will be on hand to introduce both Connery nights. Visit the Aero's website for full details and advance ticket sales.

The Cinematheque's superb Hollywood theater, the Egyptian, will host a rival spy night on Saturday, May 2, with Patrick McGoohan in Ice Station Zebra.
Posted by Tanner at 9:28 PM

I'm just disappointed that there is not another trivia contest planned. The last event was loads of fun.

So, Rubin can't return to host the Roger Moore night?