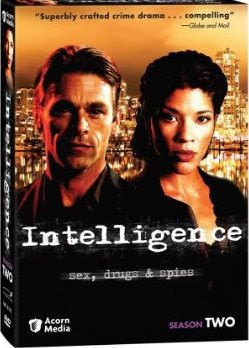 Lots of new spy DVDs out this week, although many of them are on the more obscure end of the spectrum. Which certainly doesn't make them any less essential! The biggest and most mainstream release is Intelligence: Season 2, from Acorn Media. And it's not as mainstream in America as it should be. The Canadian spy/crime drama follows officers of Canada's intelligence service CSIS and their assets (including drug runners and prostitutes). As with Sandbaggers and the early seasons of MI-5, the most interesting aspect of the series is the politics. The politics here are cut-throat, and the officers even use their assets to spy on each other as they claw for important promotions while trying to rid the service of moles and double agents. Season 2 begins with the series' most action-packed episode yet as criminal/asset Jimmy Reardon (in a continuation from Season 1's cliffhanger ending) finds himself set up by the DEA and framed for murder in Seattle. His first step is crossing the border back into Canada, which proves problematic... Meanwhile, back at CSIS, would-be director Mary Spaulding finds the political waters murkier than ever, and relations with the United States' intelligence services seriously strained, to say the least. It's like The Wire meets MI-5. Not quite as good as either of those shows, but still highly compelling, intelligent intelligence drama.
Today also sees the separate releases of two rare Antonio Margheriti Eurospy titles. As previously reported, Lightning Bolt is included in Media Blasters' latest Rare Flix compilation, Rare Flix Vol. 4. Lightning Bolt starts off slow, but if you stick with it it actually builds to a pretty spectacular finale. It's the rare case where most of the budget was saved for the end of a Eurospy movie, so that the action actually builds rather than petering out. The film also boasts a fun sense of humor and one one of the Eurospy genre's more tolerable heroes. Its second half alone qualifies it as one of my personal favorites. Read my full review here. I wasn't familiar with Media Blasters' Rare Flix series, but apparently Volume 3 (released late last year) included the rare Eurospy movie Killer Likes Candy, which I hadn't realized had ever had a legitimate DVD release in America. [UPDATE: Rare Flix Vol. 4 appears to have been delayed until next week.]
I haven't seen the other Margheriti flick out today, but I've wanted to for a while, so I'm looking forward to it. Mr. Superinvisible (1970) was Margheriti's contribution to the Italian costumed adventurer branch of the Eurospy family, but more family-oriented than some of the other fumetti movies. Ubiquitous Sixties Disney star Dean Jones stars (hoping to evoke said Disney films) as a scientist who, naturally, invents an invisibility formula, thus attracting the attention of various nefarious groups. Besides having one of the greatest titles ever, Mr. Superinvisible also features an invisible monkey sidekick. Did you hear me? I said invisible monkey sidekick! Why aren't you buying it already? This release, from a company called Wham! USA, seems slightly dubious. Hopefully the quality of the transfer is at least a little better than the quality of their cover art... Click here to read my recent week's worth of costumed adventurer reviews. 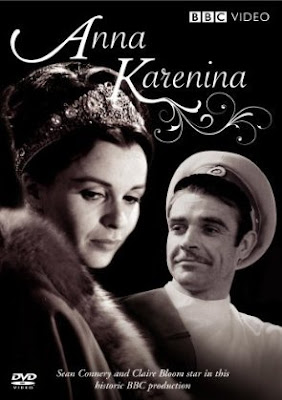 Finally, the BBC keeps unearthing lost performances from Sean Connery's younger days! Following on the heels of their rediscovery a few weeks ago of his Hotspur in Shakespeare's Age of Kings, this week they're putting out a 1961 adaptation of Tolstoy's Anna Karenina in which he co-stars with Claire Bloom. According to the BBC's description, Connery plays "the dashing soldier, Vronsky" with whom Bloom's Anna has a torrid affair, setting herself on a tragic trajectory.
Posted by Tanner at 2:03 AM

I'm hoping they release Connery's version of "Requiem for a Heavyweight".