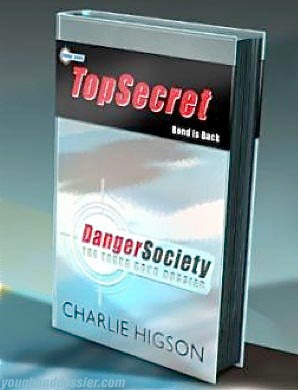 Young Bond Companion Due Out This Fall

Zencat at the Young Bond Dossier has some fantastic news this morning. Even though there's no new James Bond novel scheduled this year from Charlie Higson (and even though the future of his Young Bond series is totally unknown at this point), there will be a Young Bond companion book this fall, called Danger Society: The Young Bond Dossier. I love the title not only because it evokes Zencat's terrific site and news section (called Danger Society News), but also Kingsley Amis's James Bond Dossier, one of the first serious studies published on the subject of Ian Fleming's novels. I love companion books like this, and I've hoped for one for the Young Bond novels. We got a taste of what such a volume might be like in the awesome Young Bond Rough Guide to London (which I reviewed in full here), a mini-book given away in England to promote Higson's third novel in the series, Double or Die. And it was a great taste, which definitely left me wanting more! The credited author on the cover shown on the Young Bond Dossier (the website, that is; this is going to get confusing) credits only Charlie Higson as the author, but it seems unlikely that the author actually penned such a guide in its entirety. I wonder if Zencat had a hand in this book? (I certainly hope so! UPDATE: He didn't. Oh well.) Best of all, YBD reports that, in addition to "in-depth character profiles," features on cars, weapons and exotic locations and other "facts, statistics, photographs, maps, and illustrations by Kev Walker," this book will also feature a brand new Young Bond short story by Charlie Higson! Will this story give us our first hint of what happens to James after he's expelled from Eton at the end of the last novel? (No, that's not a spoiler to anyone who's read Fleming; it's the end we knew was coming the whole time for the initial series.) Or will it be the shipboard story that Higson had previously mulled set to take place immediately following the events of Hurricane Gold involving the return of SilverFin's Wilder Lawless? I guess we'll find out this fall...

Updated with cover artwork thanks to YBD. As you can see, the book follows the design format of the British Hurricane Gold hardcover I loved so much! We can tell it's shiny, but I can't quite figure out from this image exactly what color it is.
Posted by Tanner at 10:54 AM