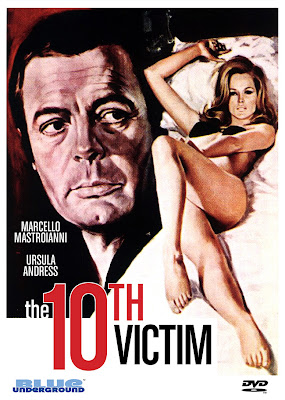 DVD Drive-In reports that Blue Underground will re-release the long-out-of-print, super-stylish Sixties classic The 10th Victim on July 28. The only special features will be the same ones available on the old Anchor Bay release (which currently commands high prices on Ebay), a trailer and talent bios. But Blue Underground's version clearly boasts a cooler cover! Elio Petri's slick satire stars Marcello Mastroianni and unbearably gorgeous Bond Girl Ursula Andress (in a wide variety of barely-there garbs) as rival assassins out to kill each other in an international competition, but–like Modesty Blaise and Casino Royale–it's better remembered for its sets and its fashions than its story. And for Ursula's gun barrel breasts, later aped in Austin Powers. Jason at Spy Vibe examined those fantastic costumes a few weeks ago as part of his costume series. Read his article here and watch the trailer at Blue Underground's site. Retail for the new disc is a bargain at $14.95.
Posted by Tanner at 10:49 PM