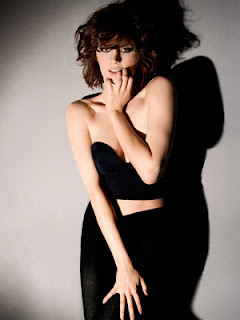 Former Bond Girl Stana Katic (the compromised Canadian secret service agent from the end of Quantum of Solace) has joined the cast of that new Richard Gere/Topher Grace spy thriller we heard about a little while ago, The Double.  Gere plays a Cold War CIA operative called out of retirement to help Grace, a young FBI agent, track a Russian assassin.  Reuters (via Dark Horizons) reports that Katic will play "a feisty Russian prostitute who fiercely protects key information."  Odette Yustman (Cloverfield) has also been cast, as Grace's wife.  A blink-and-you'll-miss-her Bond Girl, Katic is probably better known for starring as Detective Kate Beckett opposite Nathan Fillion on ABC's entertaining mystery series Castle.  The Double marks the directing debut of screenwriter Michael Brandt, who co-wrote the script with his regular partner Derek Haas.  Regular readers will be aware that Brandt and Haas are no strangers to the spy genre; the pair have contributed to such anxiously awaited in-development spy fare as Matt Helm and Robert Ludlum's The Matarese Circle.
Posted by Tanner at 12:55 AM

Brandt and Haas are some of my favorite screenwriters in the business right now. Actually, they're going to be panelists at Austin Film Festival 2010. I'm really excited to see them talk. You should look into it.

That was HER?! I'm a huge Castle fan and it's obviously been too long since I've seen Quantum of Solace.

Great news about the new movie!

Yeah, she certainly gets to make more of an impression on Castle than she did in QOS! (And I hate to be cynical, but I don't know if it CAN be too long since one has seen that. I finally gave it another try on DVD fairly recently, and as much as I try, I'm just not enjoying it any more than the three times I saw it in the theater...)

I'd agree that Brand and Haas are definitely guys to keep an eye on, and that's why I'm excited for this film! I'd sure love to read their Ludlum script. (And I hope it gets made.) Austin's a bit far away for me, but luckily we get lots of screenwriter talks here in LA, too. I'm sure they'll pop up eventually!