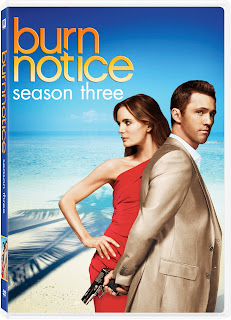 Wow, it's another busy week for spy DVD releases!

First up, Burn Notice: Season 3 is available today from Fox Home Video–just in time for this week's debut of the fourth season!  While Season 2 was available on both DVD and Blu-Ray, Season 3 is only coming out (so far, anyway) on DVD.  When the disc was first announced, TV Shows On DVD speculated that that might be due to the negative reaction in the fan and critical communities to the Blu-ray transfer of Season 2

.  Since the show is shot on 16mm, it doesn't really benefit from a high-definitition transfer, and therefore we may not ever see Season 3 on Blu.  Personally, I haven't seen the Blu-ray of Season 2, but judging by the user reviews on Amazon

that might not be a bad thing!  Anyway, I've certainly got no gripes about the transfers on either of the two previous DVD releases.  And, of course, we are talking about the best spy show currently airing, so it's worth getting no matter what!  That said, I did think that Season 3 showed a bit of a drop in quality after the excellent Season 2 (just a bit), possibly owing to series creator Matt Nix's split focus between Burn Notice and his new Fox cop show The Good Guys (whose recently-aired first episode I liked a lot) but I'll still take Burn Notice over most other shows on TV!  Special features on Burn Notice: Season 3 include last year's San Diego Comic-Con panel (a must-see for Bruce Campbell fans, as he stole the show) and the featurette "Smash, Crash, Boom: Inside the Burn Notice Stunt Unit." 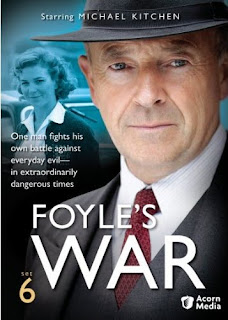 From Acorn, we have Foyle's War: Set 6. Even though the series seemed to wrap up with the conclusion of WWII (as seen in the epic box set Foyle's War: From Dunkirk to VE Day), Christopher Foyle is back again for another go in an immediate post-war setting. One could be forgiven for thinking that this British wartime mystery series (masterminded by Alex Rider creator Anthony Horowitz) was just that--a police procedural.  And it is that, but it's also so much more... including a spy show!  I suppose the very nature of police work in wartime dictates that DCI Foyle (played sublimely by the screen's best Bill Tanner, Michael Kitchen) routinely encounters foreign agents and saboteurs–and just as routinely crosses paths with (or steps on the toes of) MI-5, the SOE and other British spy agencies. And now that the war is over, there are also Soviet spies to contend with, including James Bond's real-life arch enemy SMERSH in this set's first episode, "The Russian House."  Another thing that Foyle's War is beyond a period procedural is an engrossing, character-driven drama.  This is a remarkable series, where the mysteries play second fiddle to the fabulous characters and the rich period setting.  Television doesn't get much better than Foyle's War.

Another classic wartime spy saga, Where Eagles Dare, makes its Blu-ray debut this week as part of a Warner double feature with another Clint Eastwood men-on-a-mission war film from the same era, Kelly's Heroes.  Written by thriller novelist Alistair Maclean, Where Eagles Dare tracks a covert commando unit including Eastwood and Richard Burton on a secret mission deep behind enemy lines in the fantastic setting of the Bavarian Alps.  It's a benchmark for the war/espionage hybrid genre. I understand that Kelly's Heroes, co-starring Telly Savalas and Donald Sutherland, also has some espionage aspects... but I've never actually seen it, so I can't comment further.

, starring a young Anthony Edwards, today as well.  I can't find much information about this reissue, though.  It appears to just be the same as the old DVD with a slightly altered cover.  I don't think there are any new special features, and there is no Blu-ray.  It seems like an odd time to revisit this particular title, but I remember it being a really fun take on the teen spy genre.  It was certainly a favorite of mine back in the actual Eighties.  I've got  the old disc and don't see any reason to upgrade, but this does remind me that I've been meaning to re-watch Gotcha! lately anyway...
Finally, though this isn't actually a DVD, there is an essential new release from the UK's Network this week as well: The Saint: Original Soundtrack.  This fabulous 4-disc set contains a wide selection of Edwin Astley's score music from the classic Sixties Roger Moore ITC series.  Read all about it in my full review here.
Posted by Tanner at 2:21 PM