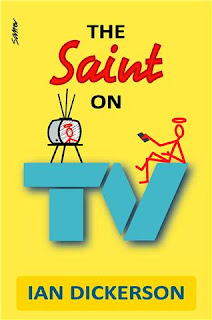 The Tainted Archive has a contribution to their "TV Cops Week" by Saint expert Ian Dickerson. His article (after raising the obvious question of how exactly The Saint might qualify as a TV cop) reveals that he has written a new book on–and called–The Saint On TV, due for publication early next year from Hirst Books.  I can't wait!  Anyone familiar with The Saint is probably also familiar with Dickerson, who not only keeps fans apprised of the latest efforts to bring Simon Templar to the small screen at the CommanderBond.net forums, but happens to be the Honorary Secretary of the Saint Club, which operates several Saint websites. He also compiled the recent Hodder "Best of the Saint" volumes.  In short, he knows his stuff! Dickerson has written a very compelling and very condensed abstract of that history for The Tainted Archive, so be sure to head over there and take a look.  You'll get a tantalizing preview of what we'll learn from his book next year!  The book will evidently cover a lot more ground than simply the most famous incarnation of Templar (starring Roger Moore).  Apparently the Saint's history with television begins more than a decade earlier, in the late 1940s. Dickerson's article, and book, trace the character from there through the height of his popularity in the Sixties to the Ian Ogilvy Seventies revival Return of the Saint, the two produced versions of the character from the late Eighties (as well as some unproduced ones) right up through the latest attempts to revive the character today!  Here's hoping there's another chapter to be written by the time the book comes out...

UPDATE: You can pre-order the book now from the publisher, who actually list an October 2010 release date. If you pre-order, you not only support the project, but also guarantee yourself a personally signed copy before it hits store shelves!
Posted by Tanner at 12:40 AM

The website won't let you order the book until June 15th.