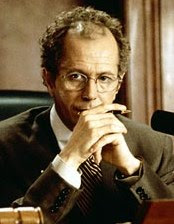 According to The Playlist (via Cinematical), Gary Oldman will play George Smiley in the new film version of John Le Carré's Tinker, Tailor, Soldier, Spy.  I was still pulling for Broadbent, but I have to admit, I never even considered Oldman, and he's pretty perfect for the part.  Smiley is notable for his utter lack of notable traits.  He's a man who disappears into the background.  I think Oldman has shown himself capable of that in numerous parts, himself disappearing completely to suit the role.  He rarely looks the same or even sounds the same, yet he's always excellent.  It's been a while since we've seen him in the lead role in a major movie, and I think he'll be great.  Alec Guinness left such an indelible mark on the part with his performances in the TV adaptations of Tinker, Tailor, Soldier, Spy and Smiley's People that it would be daunting for any actor to follow him (although Denholm Elliott and James Mason* have both taken admirable turns), but I'm confident that Oldman is more than up to the challenge.  Le Carré's Circus is full of other memorable roles (also played by excellent actors in the miniseries), and apparently those too will be filled by top-tier talent.  The Playlist reports that Colin Firth, David Thewlis and Michael Fassbender are all in talks to come aboard.  As previously reported, this version of Tinker, Tailor, Soldier, Spy is being directed by Let the Right One In's Tomas Alfredson from a script by Peter Morgan (Frost/Nixon, The Queen), who is also writing the next (indefinitely delayed) Bond movie.  I am really looking forward to this movie!  And as long as we're talking remakes of David Cornwall's sacred cows, have I ever mentioned how much I'd love to see a Daniel Craig/Keira Knightly version of The Spy Who Came in From the Cold?

*Mason's turn as Smiley-in-all-but-name in The Deadly Affair, based on Le Carré's Call For the Dead

, will air on TCM this Friday. It's a rare opportunity for Americans to see this rare but excellent film, as it's not on DVD here.
Posted by Tanner at 12:05 AM

That is pretty awesome casting. I'm still wary about this version, but casting Oldman is a definite plus :)

I was really wary at first, too, but each announcement has given me a bit more encouragement: first Morgan, then Alfredson and now Oldman. I'm very excited for this now! Of course, it's still going to be a monstrous task to concense that novel (and miniseries) into a two hour movie and make it work...

Years ago, Elleston Trevor's son was interested in doing an indie film version of one of his dad's Quiller novels. His top choice for Quiller? Gary Oldman. Shame it fell through, as I think Oldman would have been great for the part.