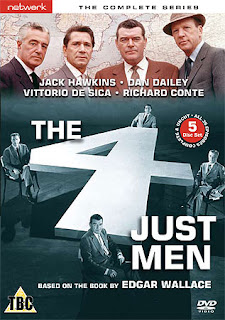 Network is on a roll!  The UK outfit has announced a DVD release of the ITC series that really put contemporary adventure series on the map for the company, paving the way for two decades' worth of shows the likes of The Saint, Danger Man, The Baron, The Champions, The Adventurer and Jason King (among many others). The Four Just Men, ostensibly based (like so many things of its era) on a 1905 Edgar Wallace novel, featured Jack Hawkins, Richard Conte, Vittorio de Sica (yes, that Vittorio de Sica) and Dan Dailey as, well, four more or less just men. The quartet banded together at the behest of their recently deceased commanding officer from WWII and made a pact to fullfill his dying wish by fighting injustice on their own terms (and with his money) in Europe and throughout the world.  After all appearing together in the pilot, the stars became rotating leads, each episode focusing on only one of them at a time.  Other recurring regulars included Andrew Kier and Honor Blackman, just on the verge of her Avengers fame.  Among the many notable guest stars were Judi Dench, Alan Bates, Jane Asher and Patrick Troughton.  Even though these adventurers were privately motivated (foreshadowing The Persuaders!), of course they got involved in plenty of espionage antics.  Plots ran the gamut of the usual ITC fare: protecting diplomats from assassination, exposing blackmailers of ambassadors, saving brilliant metallurgists from nefarious Eastern Bloc powers, etc. The series ran from 1959-1960; Network collects all 39 half-hour, black and white episodes on The Four Just Men: The Complete Series, a 5-disc PAL Region 2 release due out on August 2.  Retail is £49.99, but it can currently be pre-ordered from Network's website for just £39.99.  And so another key piece of British TV history falls into place courtesy of Network!
Posted by Tanner at 4:09 PM

I read the Edgar Wallace novel not that long ago and thoroughly enjoyed it, and then discovered the existence of the TV series.I never thought the series would actually make it to DVD though!