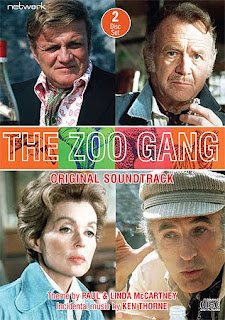 Zoo Gang Soundtrack Preview
Network has provided a suite of Ken Thorne score music from The Zoo Gang, previewing their latest (previously announced) ITC soundtrack due out next week.  This is fantastic!  I didn't remember the music from this show being so good, but I generally love Thorne's work, so I shouldn't be surprised.  It's Seventies easy listening lounge funk Nirvana!  Check out that really funky action groove that pops up about halfway through the YouTube selection!  Beatles fans might prefer to skip to the very end, when Paul McCartney and Wings' cool title music kicks in.  I think there are several variations of it on the CDs.