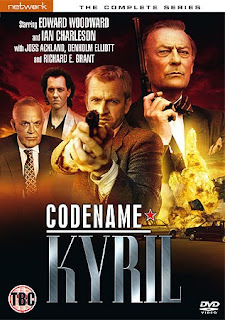 Wow, this is a very pleasant surprise!  I only ever happened upon the existence of Codename: Kyril while researching Edward Woodward for my obituary of the great Callan actor.  From the title, it was clear that it was a spy movie, so I read about it on the IMDb and immediately wanted to see it, but that wasn't possible as it's not currently on DVD anywhere, apparently.  Well, that changes on July 26 when the spy fan's savior Network releases it on Region 2 DVD in Britain!  But that's not the surprise.  The surprise for me was learning that Codename: Kyril was not merely a TV movie, as stated on the IMDb, but a four-part miniseries!  And that is the version that Network is releasing, Codename: Kyril: The Compete Series, not the truncated movie version.  Which means that there is now a whole other Edward Woodward spy series to look forward to, one whose existence I never even knew about!  (It originally aired in 1989, while he was still The Equalizer.) Regular readers will know that I've long loved Network for their uncanny ability to resuscitate even the most obscure long-dead spy series on DVD.  But I had no idea that it was within their power to actually create new old spy shows out of the ether, as they appear to have done here!  I know next to nothing about Codename: Kyril, but I'm suddenly over the moon anticipating it!  Since I've confessed such ignorance, however, I'll let Network's own copy do the talking in describing the show:


The KGB has a particularly evasive spy to eliminate: a high-ranking Kremlin traitor who has been leaking crucial secrets to London. Bucharensky, code-name Kyril, is ordered to defect to catch the attention of the intelligence services of both East and West, setting himself up as a target and drawing fi re from all sides as he makes his way across Europe to London; the object of his mission is to panic the traitor into making a mistake. But waiting in London is Kyril’s deadliest enemy: Royston, a KGB mole whose life now depends upon silencing Kyril before he can disclose Royston’s identity as a Soviet double agent...

Now check out the cast: besides Woodward, we have such spy stalwarts and pillars of British television as Joss Ackland, Denholm Elliott, Peter Vaughn, Hugh Fraser, Ian Charleson and Richard E. Grant!  It's written by John Hopkins (based on a novel by John Trenhaile), who also adapted Smiley's People and The Holcroft Covenant, and directed by Ian Sharp, second unit director on GoldenEye

.  Yesterday I had only a vague notion of the existance of Codename: Kyril, and today it is suddenly one of my most eagerly-anticipated DVD releases of the summer.

Codename: Kyril, a Region 2 PAL DVD, is a Network web exclusive.  It retails for £14.99 but can currently be pre-ordered at a discount.
Posted by Tanner at 11:38 PM

I saw the truncated version that aired on Showtime in the late '80s. Don't remember much about it but Woodward was good in it. There's a funny scene where his character is walking around with an unlit cigarette in his mouth(his character had quit but he was having a tough time with it), and someone lights it for him!

I've never heard of Codename: Kyril either. Sounds like it might be interesting. Network are a great company.

I remember watching the mini-series. Recall it being okay, but not exactly Callan (or even The Equalizer). But as with Saracen which was around the same time, I'm prepared to believe my memory might cheat!

This is a brilliant series. I have it on DVD (bad copy from tv) - Woodward is out of this world. I loved The Equalizer because of McCall's "Speeches": Kyril has an abundance of them! The music is also top notch and the novel on which this is based is one of the best spy thrillers around. Check it out - "Kyril" by John Trenhaile - it is the first of a trilogy by Trenhaile, the others being A View From The Square and Nocturne for the General.
You will not be disappointed.
Shawn