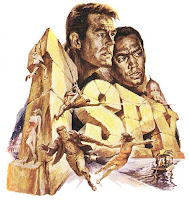 A Look At Unproduced I Spy Episodes

The Spy Report's Wes Britton reports that I Spy fans have something to be excited about!  Apparently I Spy superfan Debbie Lazar has gotten access to two unproduced scripts for the classic Robert Culp/Bill Cosby show written by Ernest Frankel.  For obvious copyright reasons, she can't post the scripts themselves (which currently reside in the collection of the University of North Carolina along with Frankel's other works), but she is summarizing each one in meticulous detail at the I Spy Forum.  The detail is so meticulous, in fact, that she's serializing her summaries, but the first part of the first script, "The Day They Gave the Bride Away," is up now.  It provides an interesting insight into what might have been had I Spy returned for a fourth season. Frankel specialized in the more serious, gritty episodes (I think people often forget just how gritty and downright dark I Spy could be), and apparently this one is no exception.  The setting is Oxford, England, which would have been cool to see.  Check it out!
Posted by Tanner at 1:00 PM

I've always love the promo artwork for I Spy that you posted with this entry.