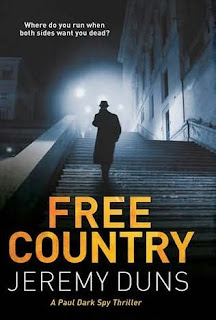 Jeremy Duns has shared on Facebook that his Sixties-set Paul Dark spy trilogy (which began with last year's very impressive Free Agent, and continues this summer with Free Country) has been optioned for television by the BBC!  Duns revealed to his Facebook followers that "the project is still in its early stages," but apparently moving along. I'm thrilled by this news.  Given a proper length, Free Agent will make terrific television. I'd almost rather see a BBC adaptation than a movie, in fact.  (I'd also love to see Stella Rimington's spy novels adapted for British television.) Duns also linked to the UK cover art for Free Country.  As you can see, it's a classic spy image and a great cover.  Personally, I preferred the stark simplicity of the Free Agent UK hardcover, but there's no denying this one sets the appropriate mood!

Free Agent comes out in paperback in the US at the end of the month.

Free Country can be pre-ordered now from Amazon.co.uk.
Posted by Tanner at 1:19 AM