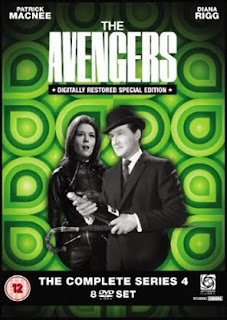 The Avengers Declassified has all the details on extras on the newest set of remastered Special Edition Avengers DVDs due out in the UK from Optimum.  These sets are absolutely mouthwatering.  I really hope that some US company picks up the rights, and puts out these Optimum versions on Blu-ray here.  Anyway, the crown jewel among many fantastic-sounding extras on The Avengers DVD Set 3 (Season 4, the first Diana Rigg season) is an early Rigg performance on Armchair Theatre–supposedly the role that got her the Avengers gig.  Now that we've finally got her episode of The Sentimental Agent on Network's release of that series, the inclusion of "The Hothouse" from Armchair Theatre makes this a banner year for Rigg fans!  All we need now is the ITV Play of the Week "Women Beware Women" for a complete picture of Dame Diana's early, pre-Avengers television career!  However, that's only one of many, many special features (over six hours' worth!) on this set, including multiple audio commentaries (contributors include Brian Clemens and Roger Marshall), an interview with the original Mrs. Peel, Elizabeth Shepherd, alternate tag scenes, alternate credits sequences, various test footage, promotional pieces, trailers, newsreel footage, script PDFs and more of the Series 1 episode reconstructions that have been sprinkled throughout Optimum's output, giving fans an idea of what we're missing in the infamous wiped episodes.  That's just an overview, though!  For the full details, hit The Avengers Declassified.  The site also has some amazing screen captures clearly comparing these new Optimum digital restorations with the murkier transfers on the old DVDs.  You'll find the difference plainly visible!  The 8-disc PAL Region 2 set containing all the black and white Emma Peel episodes comes out on July 5 in England.  It retails for £59.99, but can currently be pre-ordered on Amazon.co.uk for £42.99.
Posted by Tanner at 12:51 PM