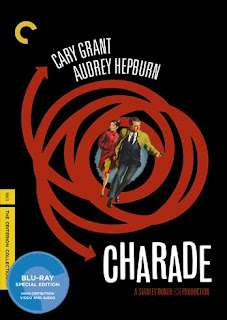 Upcoming Spy DVDs
Spy Vibe reports that The Criterion Collection will release Stanley Donen's Sixties spy classic Charade on Blu-ray this September.  According to Criterion's website, the extras appear to be the same as those on their DVD edition, but the idea of a high-def transfer of this '63 classic alone is enough to make the mouth water.  (As is that awesome cover art!)  Those aforementioned extras include an audio commentary with Stanley Donen and screenwriter Peter Stone, "The Films of Stanley Donen: A Selected Filmography," with an introduction by Donen biographer Stephen M. Silverman, Peter Stone’s career highlights and the original theatrical trailer.  Obviously Charade is a must-own for any spy fan, and whether you get the existing DVD or the new Blu-ray, the Criterion edition is the way to go.  Avoid all the public domain cheapie versions.  Criterion's Blu-ray comes out September 21 with an SRP of $39.99, but obviously it will be available more cheaply through the usual venues (including the Criterion store, where it can currently be pre-ordered.) 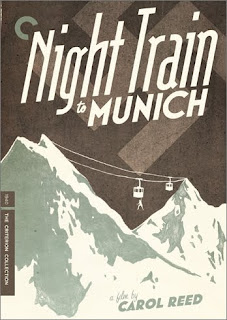 While poking around the Criterion site, I also happened upon some great news that had somehow passed me by sooner.  One of the terrific spy films of the Forties long absent from DVD is finally coming out on that format courtesy of The Criterion Collection: Carol Reed's Night Train to Munich, starring Rex Harrison and The Lady Vanish's Margaret Lockwood.  And it comes out next week!  Lockwood isn't all that this decidely Hitchcockian comedic thriller has in common with The Lady Vanishes, either.  Besides a train setting, the two movies also share a couple of screenwriters (Frank Launder and Sidney Gilliat) and the cricket-loving comic relief characters Charters and Caldicott (Basil Radford and Naunton Wayne, who also played the roles in a second feature included on Criterion's Lady Vanishes DVD).  Night Train to Munich (1940) follows Harrison as a dashing British secret agent accompanying a Czech scientist and his daughter across war-torn Europe as they attempt to evade Nazi spies.  Besides the first-rate transfer Criterion is known or, DVD features include a "new video conversation between film scholars Peter Evans and Bruce Babington about director Carol Reed, screenwriters Frank Launder and Sidney Gilliat, and the social and political climate in which Night Train to Munich was made" and a booklet with an essay by film critic Philip Kemp. SRP is $29.95, but as usual it can be found cheaper on Amazon and even from Criterion's store. 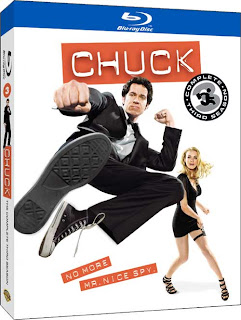 TV Shows On DVD reports that Warner Bros. has announced Chuck: The Complete Third Season for release on DVD and Blu-ray this fall. (Too bad they based the artwork on this campaign instead of this one.) The third season finds everyone's favorite nerdy spy becoming a master spy, as an upgrade in the Intersect imbues him with all sorts of untapped superspy skills. Extras include deleted scenes, a gag reel and the featurettes "Chuck-Fu... and Dim Sum: Becoming a Spy Guy" and "The Jeffster Revolution: the Definitive Mockumentary."  The DVD retails for $59.98 and the Blu-ray for $69.98. (As usual, you shouldn't actually have to pay that much if you know where to shop.)  Both hit stores September 7.
Posted by Tanner at 4:14 PM