The Beatles Vs. James Bond (Or Blond) 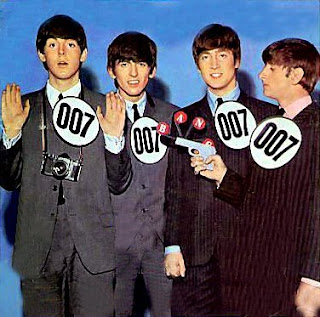 The Beatles Vs. James Bond (Or Blond)

The two biggest pop culture icons to come out of Britain in the 1960s have a strangely antagonistic relationship. It began when James Bond famously insulted the Fab Four in 1964's Goldfinger. "My dear girl," Sean Connery instructed the hapless Jill Masterson, "There are some things that just aren't done. Such as drinking Dom Perignon '53 above a temperature of thirty-eight degrees Fahrenheit. That's as bad as listening to the Beatles without earmuffs!"

The Beatles got their revenge by taking some potshots at 007 and Bond-style spy shenanigans in their 1965 film Help!, but it was all in good fun. Ken Thorne (who would go on to create the fantastic incidental music of The Persuaders!) composed a winning spy score that took some definite cues from Monty Norman's and John Barry's James Bond Theme. (The instrumentals were available on the American version of the soundtrack album, but sadly not the British one that ended up on CD. The American version was finally issued in 2006 as part of The Capitol Albums Vol. 2.)

In 1967 the animated Liverpudlians found themselves competing with secret agent James Blond for Pussy Galore... er, groupies... on their cartoon show. (Of course the actual lads couldn't be bothered to provide their own voices.) When Paul suggests that they "open the gate and let the lucky girls in," the screaming female fans trample right over the poor Beatles, flocking instead to a beaming blond hunk in a suit.

Paul laments, "Where did our fans go?"

"It's not fair!" complains Paul. (Perhaps he's still secretly stewing over that "earmuffs" remark.) "We do all the records and films and some dimpled detective gets all the glory!" The Beatles attempt to cash in on some of that glory for themselves by thwarting a crime in Penny Lane... only to discover (after performing the song to an animated music video) that the crime isn't being committed in Penny Lane, but against Miss Penelope Lane! And, of course, James Blond has beat them to it, and he ends up with Miss Lane. Can't the Beatles catch a break with 007? 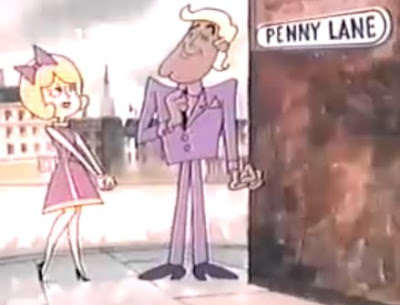 They finally did two years later, when Ian Fleming's widow, Ann Fleming, expressed a grudging admiration for the Fab Four in a letter to adventurer Patrick Leigh Fermor dated November 7, 1969*:


I am very out of touch, and will write a better bulletin soon: depression is in the ascendant, induced by having to pass what Kingsley Amis has written about Ian for the Dictionary of National Biography, and being assailed by the BBC for material for the Omnibus programme they are doing on Ian - I want to kick them all and burst into tears. Improbably, the Beatles have put my quandary into words - a song that goes

How do the Beatles know octopuses have gardens? I thought only I knew that, there must be more to them than meets the ear.

She got the lyrics slightly wrong, but the sentiment is there: Ann Fleming found solace in the music of the Beatles at a time when she needed it, which forced her to reconsider her apparently disdainful opinion of their music. Perhaps James Bond and the Beatles could get along after all?

Not if Bond producer Harry Saltzman had his way. Saltzman still wasn't won over. In his autobiography, My Word is My Bond, Roger Moore recounts an oft-told story about how the producer was displeased with Paul McCartney's title song for Moore's first Bond movie, the 1973 entry Live and Let Die:

When Harry first heard the song, he said he didn't like it but - perhaps reserving final judgement - turned to [composer and former Beatles producer] George Martin and said, 'So, who are we gonna get to sing it?' George Martin diplomatically told Harry that he already had one of the biggest recording artists of all time singing it.

Martin was now scoring Bond, and the Beatles got the last laugh when McCartney's "Live and Let Die" (performed with his new band, Wings) charted instantly and went on to become one of the best-known Bond songs of the entire series, covered over the years by the likes of Guns'n'Roses, Chrissie Hynde, Geri Halliwell and, most recently, Duffy.

A permanent truce was finally formed between the rival Sixties icons via marriage when Ringo Starr wed Bond Girl Barbara Bach in 1981. 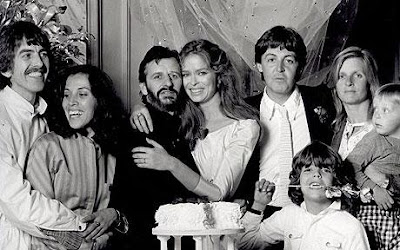 As I was in the midst of writing this post, reader 00-Rupe very fortuitously (and entirely coincidentally!) came across the photograph at the top of this article on the excellent Beatle Photo Blog and sent it to me as something that I might be interested in. I was! It was perfect timing! Thanks, Rupe.

What a great post! I never connected all the dots before, but recounted as a long-running feud ended at last by a marriage between the warring clans, it all comes together! :-)

Check out that amazingly prescient still from the Beatles cartoon. If that's not Roger Moore, I'll eat my bell-bottoms!

You know what, though? I seriously doubt ear muffs would be very effective in blocking sound. A curious gaffe for a fellow who usually has the right gadget for every occasion.

Really fun post! I've been mulling these dots over myself recently (I'm Beatles-obsessed), but hadn't connected some of them. I've never come across that fantastic still of the Fabs. Wonderful for me that such a treasure can still surface after almost 40 years of Beatles collecting. And I need to dust off my VHS copy of the cartoon collection. I don't remember seeing that episode. As The Beatles remasters release date approaches (9.9.09) and Paul starts his new tour, this was a particularly timely post to whet our appetites. Thanks, -Jason (Spy Vibe)

The Beatles and Bond seemed to arrive at the same exact time in America. Both existed before 1964, but it was clearly the year of A Hard Day's Night and Goldfinger.

My two most important sites to visit when I was in London last fall were the MI6 building and Abbey Road Studios!

I'm racking my brain to think of any other Beatles/Bond connections.

All I can come up with is the "Les Beatles" graffiti at the beginning of the '67 Casino Royale.

I recall a later interview bit as well, but here's a quote from a 7/10/64 interview:

Q: "No, no. I don't want to borrow any, John. Have you got any future in mind now? Any other ambitions?"

PAUL: "Well I think, you know, all of us want to do, sort of... a good film. One that we all think is good. And make more good records."

GEORGE: (jokingly) "Don't you think THIS one's any good, then?"

Margaret Nolan is in both a Hard Days Night and Goldfinger. She plays Dink in Miami Beach. Also the man with the Derby on the train is also in Goldfinger as Bond and M are dining with him.

After James Bond the Beatles purchased Epiphone Casino guitars. Lennon always favored his. Epiphone is Gibson guitars cheaper model. They make the better Gibson Les Paul. George Harrison was given his first Les Paul guitar by Eric Clapton. The guitar was painted red but the original painting underneath was gold as it was a Les Paul goldtop from 1957. What a coincidence

Isn't it funny that Run for your life Beatles songs can apply to any Bond girl who crosses the villain and falls for Bond. The opening line, John Lennon sings "I'd rather see you dead," Also in the Night before, "were you telling lies. Love was in your eyes is so James Bond like

I've heard someone suggest that earmuffs was a nickname for headphones. That being when they first came out it was thought they would warm the ears. Also the Beatles when they played live, screaming teenager girls would drown out their music.