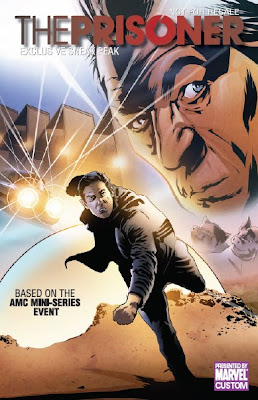 At last week's San Diego Comic-Con, AMC distributed free Marvel comic books based on their upcoming miniseries remake of the classic Patrick McGoohan TV show The Prisoner. (The remake stars Ian McKellen as Number 2 and Jim Caviezel as Number 6, referred to simply as "Six" in this reimagining.) The network were also thoughtful enough to publish a PDF of the whole thing on their website (direct link here) so that even Prisoner fans not attending Comic-Con would be able to read it. But for those collectors out there who would rather own a hard copy of the first new Prisoner comic book since DC's mini-series over two decades ago (and don't want to be squeezed by Ebay pirates), I am giving away six copies right here! All you have to do to win a Prisoner comic book is send an email with the subject heading "PRISONER COMIC" including your name and mailing address to the Double O Section by midnight, Pacific Time on Monday, August 3, 2009. Winners will be announced next Tuesday. Good luck–and be seeing you!

Visit fellow COBRAS member site Mister 8 for the most comprehensive overview on the history of The Prisoner in comics that I've seen on the web. 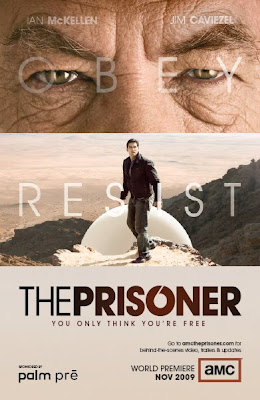 One entry per person, please. Double entries will be disqualified. Six winners will be drawn at random and announced on Tuesday, August 4, 2009. The winners' names will be posted here and they will be notified via email. All entries will be deleted immediately after the contest’s close, and no personal information will be retained or transmitted to any third parties. The contest is open to anyone, in any country. Unfortunately, the Double O Section cannot assume responsibility for items lost or damaged in transit.
Posted by Tanner at 3:33 PM