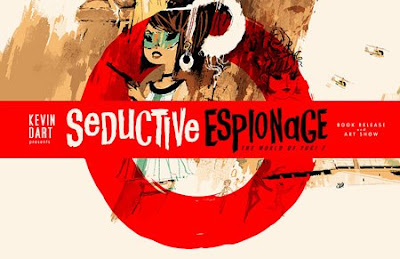 If you consider yourself a fan of Sixties spy pop culture, then you need this book!

When I first posted the link to Stephane Coedel’s fantastic animated trailer for Kevin Dart’s fictional Sixties spy heroine Yuki 7, I commented that I was dying to see the movie and that it was frustrating that A Kiss From Tokyo didn’t actually exist. Now I’ve read the book, Seductive Espionage: The World of Yuki 7, written by Ada Cole, based on Dart’s creation and overflowing with his amazing illustrations (as well as contributions from others), and as much as I’d like to see those Yuki 7 movies, it simply doesn’t matter that they don’t exist. It doesn’t matter because Dart and Cole have captured the essence of the Sixties spy genre, everything I love about it, and packed it into this book–not just a beautiful art book, but a thorough history of a series of movies that never was. 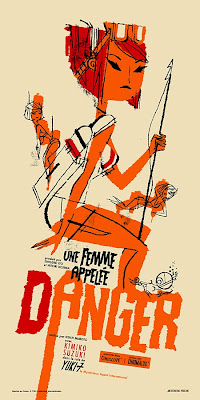 Often, the movies themselves almost feel like afterthoughts. Sometimes the poster captures the true essence of the Sixties spy genre better than the movie ever could. Take, for example, the majority of Eurospy posters. I love them. I collect them. I decorate my walls with them and I stuff the ones that won’t fit into tubes and sleeves and portfolios that litter my apartment. They’re all dripping with the best elements of James Bond: exotic locations and impeccable fashions, heroic leading men and sultry, sexy, frequently bikini-clad women clutching guns or–better still–spearguns, fast, exotic sports cars, helicopters, airplanes and even more exotic forms of transportation, amazing gadgets, exciting action and explosions galore. On paper, every movie is equal, regardless of the budget. How exciting a movie looks is limited only by the artist’s imagination, and the guys who created these posters had pretty good imaginations.

I’m looking right now at my very favorite poster in my collection, the German one-sheet for Deadlier Than the Male (or Tödliche Katzen), which hangs in my living room. Besides the gorgeous Elke Sommer, who can’t really be improved upon, there’s a man diving forward at me, out of the poster, clutching a gun. He doesn’t really look like Richard Johnson, but his pose is dynamic. There’s a man getting shot by some thugs in a car–not a scene that actually happens in the movie, but an exciting poster image. And there’s an exploding yacht and a flaming jetliner plummeting towards Earth. Those things do happen in the film (more or less), but in much less spectacular fashions. There’s a frame where a model of a jetliner suddenly stops being a model of a jetliner and is instead a modest detonation, and later on there’s a bomb that goes off, off screen, near a large-ish boat. On film, those incidents are limited by the production’s budget–but not on the poster. I love the film–love it!–but I might just love the poster even more. It’s like the director’s cut: what Ralf Thomas would have done if he’d had Broccoli and Saltzman money to work with.

Another German poster I love is the one for Lightning Bolt. After first seeing the image in The Eurospy Guide (whose caption points out the unmissable and nearly unbelievable phallic imagery of the swimsuit-clad girl perched atop the hero’s giant gun), I purchased the poster long before I’d ever seen the movie. Once again, there are explosions. There’s even a rocket launching! The poster played its own movie for me, and it was one I loved. When I finally saw the film Lightning Bolt, it certainly didn’t let me down. (I quite enjoyed it, in fact.) But it also didn’t live up to that poster image. How could it? While the second half of the film really made the most of its limited budget, the first half showcased mainly plywood sets and those ubiquitous Eurospy walls made of curtains. (There are no curtains on the poster.) The rocket launch, naturally, was a piece of grainy stock footage rather carelessly inserted into the proceedings. There are other Eurospy posters that I’ve bought and still haven’t gotten to see the movies of, but that doesn’t diminish my enjoyment of the poster images. I sincerely doubt that Password: Kill Agent Gordon can po

ssibly live up to the incredible one-sheet (though I’d dearly love to see it try!), and while the authors of The Eurospy Guide are fairly dismissive of Goldsnake, that didn’t stop them from using its iconic poster artwork as the cover to their book–or stop me from buying the poster! It won’t stop me from watching the film, either, whenever I finally get the chance. But for now, the poster tells its own story. Segretissimo is a poster I haven’t been able to get my hands on yet, but from the tiny, tantalizing jpegs that I have seen, I want to acquire the poster just as much as I want to see the film!

My point is that it’s possible to capture everything wonderful about Sixties spy movies in two-dimensional images, and that’s exactly what Kevin Dart has done in Seductive Espionage. The spy posters he’s created–French, Japanese and UK Quads–painstakingly capture the spirit of the Sixties spy phenomenon. Dart’s ultra-cool style, laden with jittery brush strokes and ragged line work, isn’t an approximation of famous Sixties poster artists like Robert McGinnis or Frank McCarthy, but each layout might well have been for a real movie poster, and Dart perfectly captures the nuances that differentiate the advertising from each of those different countries. He’s created an ideal synthesis of actual Sixties movie poster styles and his own style. 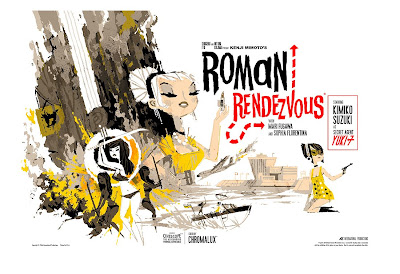 The power of Seductive Espionage goes well beyond artwork alone. This is the rare art book that you will actually want to read through from cover to cover before returning time and again to flip through admiring the pictures. Ada Cole has created text pieces that tell the whole story of this series that never was, this ultra-popular series of Japanese spy films about the adventures of female secret agent and fashion icon Yuki 7. The history of the films comes out through snippets of biographies and autobiographies of directors and producers, magazine clippings of interviews with actresses and costume designers and more. And Cole is as painstaking as Dart in her attention to detail. One magazine excerpt, for instances, tells how hundreds of Japanese girls went to fortune tellers to divine where the next shipment of Yuki 7 communicator earrings would arrive! The peculiar subtlety of the anecdote rings entirely true. Such a story would fit seamlessly into a volume like John Cork’s and Bruce Scivalli’s James Bond: The Legacy, which is full of comparable anecdotes about the height of Bondmania.

Speaking of Bondmania, Seductive Espionage captures that as well. In the book’s parallel universe, Yuki 7 became nearly as big a phenomenon as 007 himself. (Yuki 7 actress Kimiko Suzuki tells the fashion magazine Elan about meeting Sean Connery at the Academy Awards, and the interviewer asks Suzuki about the possibility of a crossover between the world’s most famous spies.) Yuki 7 inspired as many weird merchandising tie-ins as James Bond (remember James Bond Bread? I think there’s an ad for it on one of the DVDs), and Seductive Espionage devotes pages to these as well, thus incorporating the work of other artists into Dart’s world. There’s a photograph of a Yuki 7 feather duster created by Elizabeth Ito. Did James Bond ever inspire a feather duster? Not that I know of, but such a product certainly wouldn’t have been beyond the realm of possibility in 1966! We’re also treated to a page from a Yuki 7 comic book, illustrated by Bill Presing in homage to Jim Steranko’s classic wordless seduction sequence from Nick Fury: Agent of S.H.I.E.L.D. #2. The references come fast and furious, and it’s a real treat for fans of the genre to spot them.

The book is divided into chapters on Yuki’s films, focusing mostly on the first four entries–the classics: A Kiss From Tokyo (1964), Danger is a Female (1965), Roman Rendezvous (1966) and To Catch a Temptress (1967). Each one gets a plot summary, production artwork, costume designs and more–along with chapters focusing on the memorable villainesses or similar subjects interspersed throughout. Best of all, both the plot descriptions and the posters themselves each recall plenty of other spy movies. Danger is a Female, with its underwater settings (and its year) clearly invokes Thunderball, but also more than a little Deadlier Than the Male with the poster prerogative focused on bikinis and spearguns. The title itself is a nod to Death is a Woman, another classic bikini-and-speargun poster–and another poster (the Japanese version) that I bought without having seen the movie. Deadlier Than the Male also informs the artwork for Roman Rendezvous–and why shouldn't it? There are plenty more iconic moments in that film to reference! To Catch a Temptress comes the same year that Danger: Diabolik was made (but not released), and features both a masked antagonist and a number of improbable heists... on top of the obvious Hitchcock reference. It also seems to reflect the ninja craze popularized that year in You Only Live Twice. 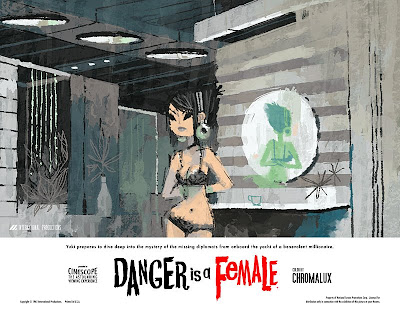 While there were some standout Japanese spy films in the Sixties, like Black Tight Killers and Age of Assassins, more of the touchstones for Yuki 7 appear to come from European spy movies. But making Yuki a Japanese series enables Dart and Cole to incorporate the seemingly disparate influences of Japanese pop culture as well, which only makes the whole endeavor all the more fascinating.

Seductive Espionage: The World of Yuki 7 actually manages to channel the Sixties spy zeitgeist better than almost any other attempt I’ve seen, in any medium–and that includes Austin Powers. Dart’s passion for the art and films of the period comes through in every brush stroke–and in his informative notes on the creation of Yuki 7 that wrap up the book. (He lays bare his whole creative process, from thumbnail sketches through the final painted images.) This is an endearing tribute to the genre I love, and instantly one of my favorite books related to the subject. It’s sure to pop up on my year end best-of lists, and would make a great Christmas present for anyone into spies, graphic design or Sixties pop culture in general. But Christmas is still five months away. In the meantime, if you’re reading his, chances are you're a fan of Sixties spies. So what are you waiting for? Go buy this beautiful book right now! You will not be disappointed. Seductive Espionage is available from the publisher Fleet Street Scandal for $25, along with various cool pieces of Yuki 7 memorabilia like prints and T-shirts. And if you're attending Comic-Con later this week, look for Kevin Dart at the Fleet Street Scandal booth.

Fantastic! Good timing, too- I posted an interview with Kevin Dart today on Spy Vibe :) Will continue with additional comments soon.
-Jason (SpyVibe)

The book is $25, Delmo, available through the "go buy it" link at the end of the article from Fleet Street Scandal's website. And well worth it! Even the box it ships in is cool, not only designed to protect the book but custom-stamped with the Yuki 7 logo.

I just read your interview, Jason. Very cool! Readers should definitely head over there and check it out.