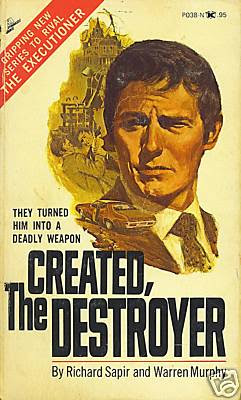 The Hollywood Reporter's Risky Biz Blog reports that Remo Williams is coming back. Columbia Pictures and Atlas Entertainment will produce a new movie based on the classic paperback hero The Destroyer, created by Warren Murphy and Richard Sapir. The Destroyer was previously filmed in 1985 by Bond director Guy Hamilton from a script by Bond screenwriter Christopher Wood as Remo Williams: The Adventure Begins starring Fred Ward and Joel Grey. As can be discerned from the behind-the-scenes talent, this was conceived by Orion Pictures as the beginning of an American James Bond franchise. Sadly, that adventure never continued. (Well, it kind of did, but as a failed TV pilot with Jeffrey Meek as Remo and Roddy McDowall stepping into Joel Grey's role as Korean master assassin and mentor Chiun. So it doesn't really count.) It's too bad, because Hamilton's low-budget comedy-action-adventure is a fun movie.
Remo Williams, however, is quite different from the Destroyer novels, though, which are also quite funny. They both parody and espouse in equal measure the odd paperback "men's adventure" genre that the pulps had devolved into by the late Seventies and early Eighties. The best examples send up the left and the right in equal measure, although some of them veer so far right that they enter almost fascist territory and suddenly you're not sure if you should be laughing or putting the book down and taking a shower. But the conceit of a cop framed and sent to death row only to be revived with a new identity as a government-sanctioned vigilante is a good one, and that's the one that Dark Knight producer Charles Roven and Transporter producer Steve Chasman aim to take. "Atlas and Columbia are in control of rights to the entire series," the trade asserts; "this pic, however, is an origin story that will center on the first book." Roven and Chasman should be the right men to guide The Destroyer to the bigscreen once again; I'd venture that the ideal (and difficult to capture) tone for such a movie would be equal parts Dark Knight and Transporter! Screenwriting siblings Charley and Vlas Parlapanides are penning the script.
At the very least, maybe a new film will inspire MGM to finally release a widescreen version of the original on DVD...
Posted by Tanner at 11:30 PM

Remo Williams really was a fun movie! Joel G made it for me.