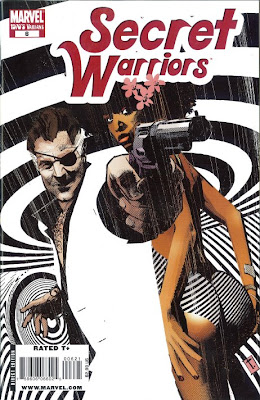 Secret Warriors is a Marvel comic book half of which features awesome Nick Fury spy action, the other half of which features big confusing battles amongst teenage characters no one cares about. I wish Marvel had had the guts to just make it a Fury book (the terrific subtitles is "Nick Fury: Agent of Nothing" following the collapse of SHIELD), but it's still nice to have even half a book's worth of the eyepatched superspy every month. Unfortunately, he doesn't get to be on the cover of his own book very much. Issue 6, which hit this week, rectifies that with a pretty awesome "70s Decade Variant" cover drawn by artist Tomm Coker. I found the design cool enough to warrant sharing. Fury fans should try to snag a copy of the variant as the regular one, per usual, does not feature him. And is it just me, or does that Nick Fury look a bit like Jack Bauer with an eyepatch? The issue also contains some big revelations about Fury and his world. (Not that Marvel continuity really means anything anymore.)
Click the image to enlarge.
Posted by Tanner at 9:29 PM