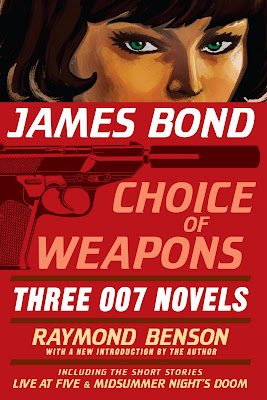 James Bond author Raymond Benson has revealed the cover art on his website for the second anthology of his James Bond novels from Pegasus Books, now titled Choice of Weapons. The eye-catching artwork nicely complements that of the first volume, The Union Trilogy, published last year. Like The Union Trilogy, Choice of Weapons will also include a real treat for Bond fans: two rare Benson short stories, "Live At Five" and "A Midsummer Night's Doom." The former was first published in TV Guide (a 1999 issue with Pierce Brosnan on the cover promoting The World Is Not Enough) and the latter in Playboy; this will be the first time either story has been collected in book format, making this edition a must for collectors! Benson's first Bond short story, "Blast From the Past," appeared uncut for the first time in The Union Trilogy collection. There is no word yet on whether these two short stories will also be expanded in the new collection. For all I know, they may not have been cut to begin with. "Live At Five" was an extremely short story owing to TV Guide's limited page allotment. I jumped straight to the short story news because those are the rarest inclusions in this book, but the meat of the collection is three Benson novels: Zero Minus Ten, The Facts of Death and The Man With the Red Tattoo. Between the two volumes, all of Benson's original Bond novels will now be collected and back in print, which is great news! Perhaps if sales remain high, Pegasus will publish a third anthology containing his three movie novelizations, Tomorrow Never Dies, The World Is Not Enough and Die Another Day... Personally, I love the idea of these anthologies, and I'm really glad that they present an affordable way to keep Benson's Bond novels in print. I'd like to see a similar reprint program bundling John Gardner novels together in such omnibuses. Choice of Weapons will be out in spring 2010.
Benson also mentions in his latest update that he will be teaching an adult Continuing Education course on James Bond at the Oakton Community College in Illinois. The six-week course on the history of Bond is called "The James Bond Phenomenon." Benson reveals that "students will view films and read books and explore the world of 007 and his creator, Ian Fleming." Chicago area Bond fans take note. It would be pretty cool to take a class on 007 from the author of what I still consider to be the definitive book on the subject, The James Bond Bedside Companion.
Posted by Tanner at 10:32 AM