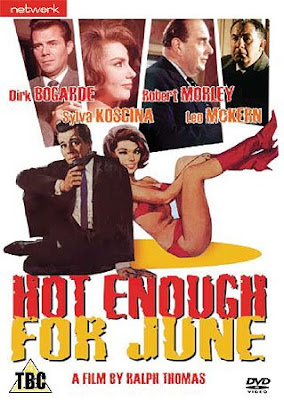 The best new spy DVD out this week is a Region 2 offering from Network in the UK: 1964's Hot Enough For June, starring Dirk Bogarde (Modesty Blaise), Leo McKern (The Prisoner's final Number 2) and Deadlier Than the Male's luscious Sylva Koscina. Released the same year as Goldfinger, Hot Enough For June (also known as Agent 008 3/4) was one of the first films to ride the 007-inspired spy wave. It's also one of the most enjoyable. Bogarde (as charismatic a leading man as ever there was) stars as an out-of-work writer who checks in at the unemployment office unaware that it also functions as a recruiting station for MI6. Robert Morley is the spymaster who tricks Bogarde into taking an assignment behind the Iron Curtain–without bothering to tell him the true nature of the assignment. Hot Enough For June was made by the same director/producer team as Deadlier Than the Male: Ralf Thomas and Betty Box. It's previously been available only as a Greek import, so Network's widescreen release (which also features image galleries and PDFs of the original pressbook and posters, which featured some utterly fantastic spy art) is a most welcome one. If you own a player that can play Region 2 discs, then get this one for sure. 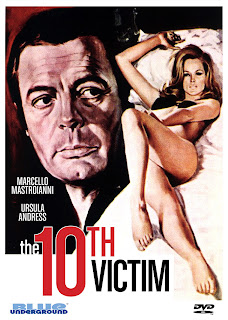 Another Sixties classic, as stylish and mod as they come, makes an eagerly-awaited return to DVD in the United States today, courtesy of Blue Underground. Elio Petri's slick satire The 10th Victim stars Marcello Mastroianni and unbearably gorgeous Bond Girl Ursula Andress (in a wide variety of jaw-dropping, barely-there costumes) as rival assassins out to kill each other in an international competition, but–like Modesty Blaise and Casino Royale–it's better remembered for its sets and its fashions than its story. And for Ursula's gun barrel breasts, later aped by the fembots in Austin Powers. This edition retains the fairly scant features found on the long out-of-print Anchor Bay edition, which will presumably now lose all of its considerable value.

Finally, today also sees the release of Joss Whedon's spy-fi series Dollhouse: Season One, starring a modern actress sexy enough to fit comfortably in the same post as Sylva Koscina and Ursula Andress: Eliza Dushku. Dushku plays Echo, an unwitting agent (or "active") in the service of a mysterious organization known as The Dollhouse. Actives are imprinted with personalities uniquely suited to the mission at hand, and then re-programmed again and again for each assignment. Over the course of the first season, Echo slowly become and more self-aware–and the show gets significantly better. Meanwhile, agents of the FBI and the NSA are closing in on the Dollhouse, each with their own agendas. The highlight of the season was the most espionage-heavy episode, "A Spy In the House of Love." The DVD and Blu-Ray notably contain an episode that never aired on TV, "Epitaph One," as well as the original, unaired version of the pilot.
Posted by Tanner at 12:58 PM