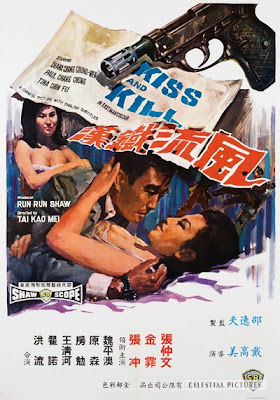 The July 4th holiday brought a surprise wave of announcements about upcoming releases of non-American spy movies from the 1960s. Eurospy Forum member "John Drake" (a top man, of course) spotted an update on the blog for Onar Films announcing the impending DVD release of the 1966 Turkish James Bond ripoff, Altin çocuk (Golden Boy) and its sequel Altin çocuk Beyrutta (Golden Boy In Beruit). The rather awesome trailer for the first film can be seen here. Onar is the company responsible for the official, critically-lauded, feature-laden DVD releases of the Kilink films (the Turkish version of skeleton-suited Italian costumed adventurer Kriminal). The titles are expected by the end of this year. On his blog, the Onar Films principal also says that the Altin çocuk character appeared in two more films, and that if (and emphatically only if) sales are strong on the first two, he would acquire the rights to release those as well. So spy fans must make a strong showing when these come out!
Furthermore, the ever-vigilant Drake also points the way to a Shaw Brothers fansite, Shaw Brothers Reloaded, reporting that rights holder Celestial Pictures plans to releases a whopping eighty previously unavailable films on DVD later this year to celebrate the studio's fiftieth anniversary. Among them are several spy films the Hong Kong studio made in the late Sixties to capitalize on the success of James Bond just as the Italians, the French, the Turks and everyone else did. The titles in question are Operation Lipstick (1966), Kiss and Kill (1967), The Brain Stealers (1968) and the 1969 detective movie Dark Rendezvous. Like their Euro-equivalents, these Hong Kong spy flicks tend to concern themselves with stolen warheads, kidnapped inventors and deadly rays–along with the odd chemical capable of accelerating the growth of plants... or humans. It's not clear to me what region these DVDs will be released in, although Image Entertainment handles Shaw Brothers titles in the United States.
Finally, DVD Sleuth reports that top Eurospy distributor Dorado Films will finally, officially go mainstream this fall! The first batch of titles from their new distributor will hit shelves (actual shelves this time; previous Dorado titles have been available only through their website) on October 27. It's mostly spaghetti westerns, but one Eurospy re-release makes the cut: the 1965 Ken Clark 077 film From the Orient With Fury (Agente 077 dall'oriente con furore). The reissue will feature a new cover and possibly undetermined additional extra features, so it might be worth re-buying even for those who already purchased the previous edition. And if you don't have that one, this title is well worth picking up! After that, the studio has promised to deliver all five Ken Clark Eurospy titles in the next few years, including the long-awaited Fuller Report. So there's lots to look forward to!
Posted by Tanner at 9:06 PM

I couldn't find any news here about how the "Rain Fall" movie based on Barry Eisler's Rain series fared at the box-office.

Did it ever get released in USA? Because it is a Japanese movie based on novels by an American author.

Barry Eisler is an ex-CIA operative who now shuttles between Japan and USA.

It is not exactly the typical espionage thing but well the author was a CIA agent, so thought I would mention it here with regard to foreign spy movies.

Also, great blog you have here, bookmarked and shared with all fans in my circle.

Thanks for stopping by, 2Write! Glad you have you around! Honestly, I haven't heard anything about the Rain Fall movie since I reported on the casting article in Variety
over a year ago. It definitely hasn't opened yet in the US. When it does (and with Gary Oldman in a starring role, I would imagine it will), you can bet there will be covrage here! I'm looking forward to this.

Great posting!! These all are my all time favorite movies. Actually these movies made on different themes and actors do fantastic role. So that’s why we all like to see spy movies.