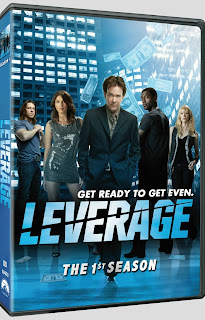 Leverage: The 1st Season, out today from CBS/Parmount, may be an obvious attempt on the part of cabler TNT to copy USA's superior Burn Notice, but it's still loads of fun in its own right. Basically, it's a modern-day take on Mission: Impossible in the same way that Burn Notice updates the old Saint formula. Timothy Hutton leads a team of various experts in different fields (hacking, fighting, burgling, acting, etc.) to commit elaborate cons against myriad bad guys week after week, just like Peter Graves did all those years ago. It's actually much closer to the M:I formula than the Tom Cruise movies that officially continue the brand! The DVD is a surprisingly feature-laden affair. All thirteen episodes include audio commentary and deleted scenes, for starters. There are also a number of featurettes on the making of the series, the fights, the stunts, the cameras, etc, as well as some short comedic features. Leverage: The 1st Season is currently selling for nearly 50% off at Amazon.
Posted by Tanner at 10:32 PM