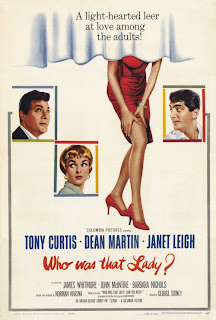 Future spy guys Tony Curtis and Dean Martin teamed up for a black and white spy comedy before the Bond boom: 1960's Who Was That Lady? Who Was That Lady? is incredibly dated for a number of reasons, the biggest coming at the very beginning and the very end. The whole plot is set into motion during the opening credits when wife Janet Leigh walks in on husband Tony Curtis in his university science lab kissing a female student. Needless to say, she’s not happy. In fact, she declares there and then that she’s going to divorce him, and storms out. What she failed to take into account, however, was that this is 1960 and Tony was only cheating on her in the completely acceptable way that all husbands cheat on their wives! So Tony turns to his TV writer friend Dean Martin and explains it to him. Of course Dino accepts that the problem is with Janet, and not Tony. How can a wife be so shrewish as to take umbrage at being cheated on? So can Dino use his screenwriting skills to help Tony out of this one?
All it takes is chemist Tony whipping up a batch of homemade hooch in his lab to convince his pal to help out, and Dino concocts a plot wherein Tony is an undercover FBI agent, and what Janet saw was merely him doing what he had to for the good of his assignment. Even Tony’s not buying this one at first, but then Dino shows off an old fraternity tattoo and does some hardboiled doublespeak and suddenly convinces Tony that he’s an FBI man! Of course he’s not; he was merely demonstrating that it only takes a few props and lies to make someone believe that. It will work on his wife. Just to make sure, the pair of them swing by CBS on their way home so Dino can pick up some props from his place of work: a dummy gun and a fake FBI identification card for his buddy.
Sure enough, after some protestations on the wife's part and some wild finagling on Dino’s part, the two guys succeed in making Janet believe that they both work for the FBI. She feels awful that she ever doubted her hero husband, and naturally calls off her plans for divorce. Unfortunately, the prop man has reported the fake FBI card to the real Feds, as any good citizen would have done in the days of J. Edgar Hoover. And the Feds take interest in the situation, sending a man round Tony’s apartment to find out what’s going on.
Needless to say, this leads to hijinks. From here on in, the movie is a succession of farcical setpieces–usually lengthy scenes in single locations, betraying the story's stage play origins. Realizing that her husband’s forgotten his "gun," Janet takes the real FBI man (James Whitmore, who’s swung by to discourage Tony from impersonating a Fed) down to the Chinese restaurant where Tony and Dino are on a "mission" to entertain two buxom blond "enemy agents." The Fed has no idea what she’s talking about as she excitedly relays all the lies she’s been fed: the proprietor is a Chinese Nationalist–Madame Chiang Kai-shek’s uncle, in fact, the showgirls are Russian spies, at a certain moment the two men will head for the men’s room to confer, etc. After too lengthy a build-up, all the mistaken identities culminate in a shooting that garners national media attention–and, consequently, the attention of real Russian spies, as well as the CIA. Now everyone’s after Tony, Dino and Janet.
Things build to a climax in the Empire State Building that result in a humorous closing shot of smoke pouring from the top of this New York City landmark thanks to the characters’ comedic capering. Of course the filmmakers then couldn’t have possibly predicted the horrific associations that imagery would generate decades later, but this one is undeniably another moment you sure wouldn’t find in a film today! It’s also a pretty fitting way to close the occasionally enjoyable but utterly slight time capsule that is Who Was That Lady?, a product of its era that fails to transcend it like the early Bonds or epitomize it like Modesty Blaise. Fortunately Curtis (The Persuaders!), Martin (Matt Helm) and Leigh (The Man From U.N.C.L.E.)–all talented performers in their own rights–would each go on to better spy roles later. Oh, and, yes, Leigh does find out the truth, eventually, but learns to be more tolerant of her husband’s philandering ways, while he learns that jealousy is an admirable trait in a wife. That’s the moral.
Posted by Tanner at 11:14 PM

Mr. Tanner, there's a sayin' "better late then never" and guess that woulda apply to our late discoverin' of your coolest of cool review of the Dino-classic "Who Was That Lady." We digs how youse sees this as a prelude to our most beloved Dino playin' hipster spyster Matt Helm. Never was, never will be anyone as cool as the King of Cool...oh, to return to the days when Dino walked the earth. Know that your reflection is bein' shared this day with all the pallies gathered 'round ilovedinomartin.