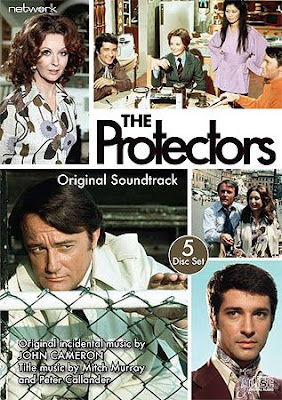 Network has announced the next title in their amazing line of soundtracks to Sixties and Seventies ITC shows: The Protectors. The Protectors saw man from U.N.C.L.E. Robert Vaughn return to the world of international intrigue (circa 1972) as globetrotting private detective Harry Rule. Rule was assisted by the Contessa Caroline di Contini (The House That Dripped Blood's Nyree Dawn Porter) and "the other protector" (the one everybody always forgets about), Paul Buchet (Tony Anholt, who did his best to stand out by adorning himself in the gaudiest costumes on ITC's whole gaudy Seventies costume rack–well, the ones Gene Barry couldn't squeeze into, anyway). The Protectors was one of several forays into the live action realm by prolific supermarionation maestro Gerry Anderson, and (thanks also to a reliable stable of ITC writers like Brian Clemens and Donald James) more successful with its half-hour format than its contemporary, The Adventurer. (Er, even though that was pretty much the same stable of writers!)
Musically, The Protectors is best remembered for its catchy, moody theme song, "Avenues and Alleyways," which was performed by pop crooner Tony Christie and penned by Mitch Murray and Peter Callander. An instrumental version played over the opening credits (which were audacious enough to include scenes of the helicopter chase in From Russia With Love as exciting "stock footage" amidst slightly more mundane new material, like shots of Vaughn making an egg for breakfast!) and the vocal closed things out. Presumably the Network soundtrack will include both and more, as it promises "versions" (plural) of the vocal theme, as well as a song by Ertha Kitt. However, the majority of the music spread across this five-disc(!) set–all compiled from the original master tapes and never before released–is by composer John Cameron. According to Network, the nearly 400 pieces of music(!) included were all "especially composed for the series" and incorporate genres as varied as "jazz, disco, funk, blues, lounge core, country, comedy and suspense." As always with these releases, extensive (and most likely impressive) liner notes from author, expert and all-around know-it-all Andrew Pixley round out the collection. Whew! This should be quite a set. It will be available to order from Network on July 27 and retail for £39.13 .
Posted by Tanner at 6:22 PM

I'm listening to Network's 3-CD set of The Prisoner (thanks to Jason over at Spy Vibe) and I can attest to the fact that these releases are thorough! It's wonderful that there's a company out there willing to go through the vaults and release this music. Never in a million years would I ever think these scores would ever see the light of day.

I eagerly await THE PERSUADERS!

I'll probably be dead & buried by the time Network releases THE SAINT.