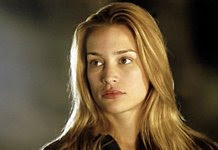 No, the Coyote Ugly actress hasn't joined up to serve her country; rather, she's been tapped to star in the new spy series for the USA Network, Covert Affairs. According to The Hollywood Reporter, "the project, which has been quietly casting two major roles for the past month, hasn't received a firm pilot order, but a green light is expected within a couple of weeks." For those who've forgotten the premise, the trade reminds us that Covert Affairs is written by Matt Corman and Chris Ord and "centers on Annie Walker (Perabo), a CIA trainee who speaks six languages and excels at any endeavor she undertakes. Walker joins the CIA while still reeling over a mysterious ex-boyfriend who appears to be of particular interest to her new bosses. She vows never to let herself be hurt again, but that proves to be a tall order." Now the hunt is on to find an actor to co-star as the blind tech expert who assists Walker in her assignments. Covert Affairs counts Bourne Identity director Doug Liman as an executive producer, so it's got a good spy pedigree to make it a companion piece to USA's breakout spy hit Burn Notice.
Posted by Tanner at 5:36 PM