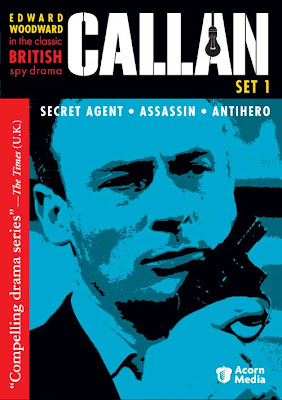 Spy fans, rejoice! Thanks to Acorn Media, American espionage aficionados at long last have the opportunity to watch one of the cornerstones of spy TV that's been very hard to see in this country: Callan. Edward Woodward stars as the titular antihero, an unenthusiastic assassin for "the Section," a shadowy division of Britain's Security Services that handles the most unpleasant assignments. The series ran from 1967 to 1972 before spawning a theatrical movie and a TV reunion show nearly a decade later. It's difficult to imagine such a serious spy drama coming out of the same period of British television that gave us The Avengers, The Champions, Department S and lots of other wonderful, lighthearted spy fluff, but Callan delivers the grim and gritty well before–and with the same high level of quality as–the better known classics of the Seventies like The Sandbaggers and Tinker, Tailor, Soldier, Spy. Like Sandbaggers (and most other lower budget British TV shows of the era), Callan's interiors are shot on video while the exteriors are filmed. Viewers not used to this can find the aesthetics a bit shocking at first, but will quickly get used to them as they're sucked into the drama and the rich characterizations. Illness prevented me from posting my full review today, but I'll have it up in the near future. Suffice it to say, this is an absolute must-buy for any fans of serious spy television. One caveat, though: Like Umbrella in Australia, Acorn has opted to begin with the first color season, which is actually the show's third. Overall, this has little bearing, except in the case of the first episode. It picks up directly where the previous (black and white) season ended on a cliffhanger. With no explanation or summary provided, it proves pretty disorienting and impenetrable for a first-time viewer. My advice is to skip it altogether and begin instead with the excellent second episode, then go back to the first one once you've gotten to know the characters a bit better.
Posted by Tanner at 7:28 PM