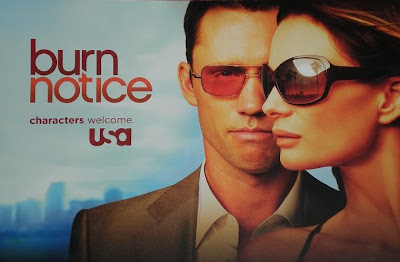 According to The Hollywood Reporter, last Thursday’s original episode of Burn Notice on USA not only easily topped the cable ratings; it also bested most of the networks' offerings in the key demographic of adults ages 18-49. This popularity was certainly reflected by the line for its panel at Comic-Con a week ago, which snaked out of the convention center, looped through a mercifully tent-covered maze outside and finally doubled back into the cavernous Ballroom 20, which accomodated the first 4000 fans in that line. The panelists on hand were series creator Matt Nix and co-executive producer Alfredo Barrios, Jr., co-star Bruce Campbell (Sam Axe) and recurring guest stars Jay Karnes (Brennen), Seth Peterson (Nate), Ben Shenkman (Stickler) and Michael Shanks (Victor), who moderated. It should come as no surprise to anyone who’s ever been to Comic-Con (or anyone who’s ever listened to an audio commentary on one of the Evil Dead movies) that Bruce Campbell dominated this panel. As he should. He’s the King of Comic-Con. (Though Kevin Smith is probably the Pope of Comic-Con, who might wield more power...) When someone shouted out that they loved him, Campbell demanded to know who had said that and then stood up and proceeded to pay the person cash from his wallet. If he didn’t already have the crowd eating out of his hands, he certainly did at that point. Despite claiming he was broke after each occasion, Campbell kept hilariously paying people throughout the panel, including one audience member who suggested that Sam should have more fight scenes on the show.
Of course, despite appearances (one young fan asked Nix is Campbell was the person who helped him come up with "all the funny stuff," much to the writers’–and actors’ amusement–though it was revealed that a lot of Bruce’s final lines in scenes are ad-libs), Matt Nix is the man responsible for Burn Notice’s success and the direction it goes. The first question he fielded dealt with Michael Westen’s (Jeffrey Donovan) absent and (presumably) long-dead father. To the implication that his mysterious dad might play a role in future events, Nix declared, "Michael’s father is not the one who burned him." He never intended for people to think that, but realized that when you have a show with a central, driving mystery and a conspicuously absent character, people are bound to make connections. Nix pointed out that there had already been a spy show with various family members (often long-estranged or believed dead) who all turned out to be spies and shadowy figures pulling the strings of the hero(ine): Alias. The only reason he included Michael’s family life to begin with (in the person of his widowed and long-suffering mother, Madeline, played by Sharon Gless) was because he wanted to explore what sort of background led people to become covert operatives. Broken homes, apparently, are common history for many spies.
When asked what resources they used to come up with Michael’s MacGyverish spy advice, the writers credited their consultant, Michael Wilson (no, not that Michael Wilson)... before revealing that most of it comes from "the Internet." The trick is to give just enough information to sound plausible, but it’s okay to fudge the details like how long it actually takes to do some of that stuff. Nix was quick to assure people that they never provide enough information that someone could kill themself trying Michael Westen’s techniques. "They’d have to go do their own Internet research for that!" quipped Barrios. He also added that writing the voice-overs was the hardest part for all the writers besides Nix, because they sound exactly like Nix does when he talks!
Bruce Campbell wanted audiences to know that Nix won’t have any digital explosions on his show. Nix chimed in and said that they always looked fake. He likes blowing things up for real. He likes the little details, like a rearview mirror flying off a car and breaking its window, things he says the digital artists never get. I suppose this policy explains why wealthy art thieves sometimes end up driving ‘88 Jags: it’s pretty expensive to destroy late model Mercedes for real every week! There was one explosion this season that ended up being pretty costly, though. When Fiona wired the house of returning bad guy Brennen (Karnes) to blow up a few weeks ago, the practical stunt was supposed to blow out all the windows, giving the impression that the whole house blew up. But the technicians misjudged, and they ended up exploding the whole house for real! Well, it looked good.
In dominating the panel, Campbell found the majority of the audience’s questions aimed at him, including some unrelated to Burn Notice. (The funniest moment of the hour came when he acted hurt over not being cast in Sam Raimi’s latest horror movie, Drag Me To Hell, and he assured the crowd that Raimi would "pay" for that.) Even questions that made more sense going to other people were directed at Campbell. Although Seth Peterson, who plays Michael’s brother Nate, was sitting right there at the other end of the table, one fan asked Bruce if Nate would have a bigger role this season! "You’re asking me?" Campbell gaped. Peterson did get a chance to speak himself when another fan asked him what had changed most for his character. "The biggest thing that’s changed for me is Nate’s facial hair," he quipped, going on to explain that fans hated the character when he sported his scruffy goatee, but had really come around on him since he shaved it off. 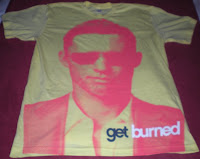 From Bruce Campbell’s constant jokes to Matt Nix’s thoughtful answers, the Burn Notice panel was one of the highlights of this year’s Comic-Con, even without series stars Jeffrey Donovan and Gabrielle Anwar present. (One suspects Campbell would have still dominated even if Donovan had been present.) Hopefully the event was filmed and will be included on the DVD of Season 3. Everyone who attended was rewarded with a ticket to collect a cool Burn Notice T-shirt.
Posted by Tanner at 2:29 PM