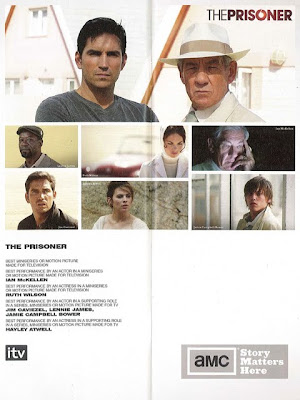 AMC Touts Ian McKellen For Best Actor From The Prisoner

It's Awards Season, and that means that every studio and network runs ads in the trades touting the talent from their movies or shows for the consideration of the the Academy, or the Hollywood Foreign Press Association, or the Screen Actors' Guild, or whoever. Interestingly, AMC has chosen, in a two-page spread in The Hollywood Reporter, to put forward Ian McKellen ("Two") as the "Best Actor" candidate from its miniseries remake of The Prisoner, instead of "Six" Jim Caviezel. It's an interesting choice because Caviezel is clearly the main character, with more screentime. But, as I mentioned in my review, McKellen's is undoubtedly the showier performance, and clearly has the better shot at winning a Golden Globe, despite the fact that his role is actually a supporting one. (Being the bigger star, McKellen was also top-billed.) AMC lists Caviezel as being "For Your Consideration" in the "Supporting Actor in a Miniseries" category, along with Lennie James (147) and Jamie Campbell Bower (11-12). They also tout Ruth Wilson in the "Best Actress" category, and Hayley Atwell in the "Supporting Actress" field. In the same spread, the cable net also pushes its more acclaimed series, Mad Men and Breaking Bad. Click the pictures to expand.

The fact that an actor playing Number 2 could even be considered the lead illustrates how very different this incarnation of The Prisoner is from the Sixties version. That series rested squarely on the shoulders of lead actor Patrick McGoohan (Number 6) alone, with no other regular characters. (Well, save for the diminutive butler.) 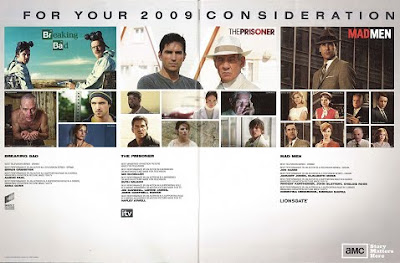 The new Prisoner was horrible. All of the qualities that made the original great...humor, brilliant dialogue, wonderfully imaginative scripts...were replaced with incoherence.