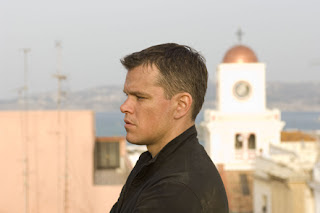 Matt Damon loves talking about not doing another Bourne movie as much as Sean Connery used to love talking about not doing another Bond movie. On a press junket promoting his latest film, Invictus (for director Clint Eastwood), Damon commented on Bourne Supremacy and Bourne Ultimatum director Paul Greengrass's recently announced decision not to make another Bourne film. According to Dark Horizons' Garth Franklin, Damon stated that he flat-out wasn't interested in returning to the role without Greengrass. "I'll just wait for him and when he wants to do one, we'll do it... I think it'll happen down the road. We just don't have a script yet." Asked by a reporter to clarify that he meant it was essentially Greengrass or nothing (The Damon Ultimatum?), Franklin reports that the actor responded, "Yeah, I've always said that." (For the record, he has said that before.) He later confirmed his stance once more to MTV, making it clear that he believes Greengrass will eventually find the opportunity for the movie, and that he isn't interested in pursuing it himself until that time.

The question, of course, is will the studio wait? Bourne is a cash cow for them, and as The Hollywood Reporter pointed out last week, there are other options. James Bond, after all, has survived multiple actors and multiple directors. As has Jack Ryan, and countless other characters, among them other spies. Would Universal rather move forward on a fourth Bourne film sooner and without Damon, or wait for their star even if that means letting four or five years pass between films? Or will Damon eventually come around, and be persuaded to come back even without Greengrass at the helm? Like Connery, the actor has said "never" before, and later relented. So anything's possible, and only time will tell...

Read my review of The Bourne Ultimatum here.