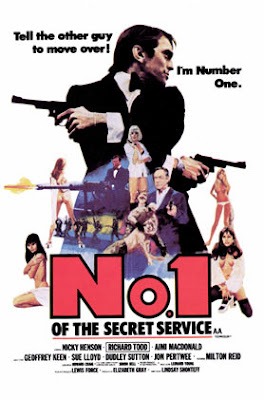 British actor Richard Todd has died of cancer at the age of 90, according to the Associated Press. Although Todd is probably best known for his performances in some great war films of the Fifties and Sixties (including The Dam Busters and The Longest Day) and Alfred Hitchcock's Stage Fright, spy fans will likely remember him from a string of espionage roles in the Sixties and Seventies, including Operation Crossbow (1965, with Tom Courtenay and Richard Johnson), Subterfuge (1968, with Gene Barry and Tom Adams) and Lindsay Shonteff's No. 1 of the Secret Service (1977, with Nicky Henson). Todd was a great actor who shined equally in gritty leading roles like in Never Let Go (1960), in which he stood up to a villainous Peter Sellers (playing it straight), and in meaty character parts, such as in Amicus's Asylum (1972), as part of a stellar ensemble that included Peter Cushing and Herbert Lom. Which is why I feel slightly ashamed that the role I will always associate him with is as the villain, Arthur Loveday, in No. 1 of the Secret Service, which is at best a guilty pleasure and at worst a pretty awful movie. (I recognize the latter, but stand firmly in the former camp.) Todd is the most memorable thing about that film, and stole the show right out from under star Nicky Henson, who played the bargain basement Bond surrogate, Charles Bind. Although he was clearly better than the material and could have easily sleepwalked through his role and collected his paycheck, Todd relished every syllable as the suavely slimy Loveday.

Interestingly, the angle that the Los Angeles Times chooses to take in their version of the AP obituary is also a spy angle, but one I hadn't heard before (or had forgotten if I had). Their headline: "British actor Richard Todd, Ian Fleming's choice to play James Bond, dies at 90." Interesting. According to the AP story, "Fleming had preferred Todd to take the lead in Dr. No in 1962, the Daily Telegraph said in its obituary, but a schedule clash opened the way for [Todd's Longest Day co-star] Sean Connery to define the part. Instead, Todd took the role of role of Inspector Harry Sanders in Death Drums Along the River, released in 1963." So the LA Times pulled for its headline a part of the AP obituary that quotes the Daily Telegraph. Got that? Let's try to untangle that web of attributions (or lack thereof) for just a moment. Fleming had a lot of "choices" to play his famous hero prior to Dr. No (David Niven and Roger Moore are frequently–and perhaps apocryphally–mentioned), as anyone who's read Robert Sellers' hugely informative The Battle For Bond will be well aware. In his excitement to see his books translated to the screen, Fleming even wrote in a letter to Alfred Hitchcock that Jimmy Stewart would make a fine Bond, as long as he could pull off a decent British accent! Sellers may have mentioned Todd; I honestly can't remember. But my guess is that the Telegraph was getting their information from Wikipedia, whose entry on Todd cites the actor's autobiography, Caught in the Act, as its source for that tidbit. Interestingly, the site also mentions (again culling from Todd's memoirs) that "in the 1960s, Todd unsuccessfully attempted to produce a film of Ian Fleming's The Diamond Smugglers." Personally, I've always wondered why no one ever made a film of The Diamond Smugglers, if only to cash in on the success of the Bond movies. A Richard Todd version would have been interesting.

At any rate, Richard Todd leaves behind a resume full of great films (and not-so-great ones) that he actually did star in, so it's probably better to remember him for one of those, be it The Longest Day (wherein her retraced the steps he actually took as a paratrooper on the real D-Day) or, ahem, No. 1 of the Secret Service, than for a role he didn't get.
Posted by Tanner at 11:33 AM

Great info. Thx! The Grim Reaper has been taking his toll of spy icons recently.

Yeah, it seems that way, doesn't it? Very sad. Unfortunately, I guess we're just that far away from the Sixties heyday of the genre that we're starting to lose a lot of those stars.