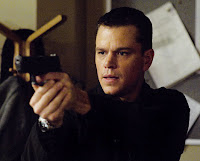 Variety reports that Paul Greengrass, who directed The Bourne Supremacy and The Bourne Ultimatum, will not return to helm a proposed fourth film in the Jason Bourne franchise. Greengrass hopes to remain involved "in some capacity," just not directing. Besides quotes from the director and the studio singing each other's praises, the rest of the trade's story is pure speculation... but interesting speculation. First and foremost, will Matt Damon remain involved without Greengrass? He's not officially signed on, and had previously stated that his involvement was dependent on the script and director. Damon and Greengrass recently reteamed on the Baghdad-set spy thriller Green Zone, which the trade suggests lives up to its "Bourne in Iraq" advertising campaign.

As previously reported, George Nolfi (who worked on the scripts for the last two films) was originally hired to write the fourth installment. However, when he became busy with another Damon film (which he's also directing) called The Adjustment Bureau, the fourth Bourne became a lower priority. Joshua Zetumer, who did uncredited work on Quantum of Solace, was brought in to pen a "parallel script." But according to Variety, "the movie hasn't yet taken shape, despite the efforts of producer Frank Marshall, and Captivate Entertainment's Jeffrey Weiner and Ben Smith, who control the rights to the novels of the late Robert Ludlum."

The trade posits several possibilities for the future of the franchise. One is that "if Damon, who has been hands-on creatively with the franchise, is happy with the job that Nolfi did on The Adjustment Bureau, he might back Nolfi's candidacy to tackle the fourth Bourne, maybe even as director." Another is that Tony Gilroy, who worked on the scripts for all three Bourne movies before going onto a successful directing career himself with Michael Clayton and Duplicity, might be persuaded to do a rewrite on one of the extant scripts and direct. The final option mentioned is, should Damon not be interested in returning, "rebooting" the series from scratch. "The films were never closely tied to Ludlum's books," notes Variety's Michael Fleming, "and any future pics could take creative license as well with a new cast, characters and situations."

May I be so bold as to state the obvious here? Since, as Fleming says, the current movies (good as they are) haven't exactly adhered to Ludlum's novels, how about using those for a basis for any "reboot?" There are two perfectly good Robert Ludlum Bourne plots that remain completely untouched by the filmmakers, and another that barely had the surface scratched. Wheter Damon remains attached or not, I'd personally like to see the film's producers look back to the books. They should take a not from the most successful spy franchise in history, who they've clearly been emulating, whether they admit it or not. Michael G. Wilson and Barbara Broccoli have stated time and again that whenever they feel the James Bond formula is getting stale, they turn back to the novels of Ian Fleming. Marshall and Weiner should do that same thing with Ludlum. There's a reason the author's books were all bestsellers.

In other Bourne news, today's Hollywood Reporter reports that the three existing Damon Bourne films will be re-released for the umpti-billionth time on DVD on January 19 using new technology. "Universal Studios Home Entertainment will introduce so-called flipper discs, containing traditional video on one side and an HD [Blu-ray] version on the flip side, for planned special-edition releases of The Bourne Identity and its two sequels. The DVD and Blu-ray Disc sides of the titles will include the movie and bonus features." Unfortunately there's no information on what these bonus features will be, but hopeful they will include new material and hopefully they will also contain the excellent documentary "The Ludlum Files" which has popped up on a few releases of the trilogy, but not the current DVD version. "Universal's flipper discs," according to the trade (probably channelling a press release), "are the perfect way for consumers to future-proof their collections while still enjoying their favorite movies on all their existing DVD players." Personally, I think that's a great idea. Right now consumers who haven't yet adopted Blu-ray technology (and that is still the majority, one has to remember) are reluctant to purchase new DVDs or especially new versions of old DVDs they already have because of the prospect of getting a Blu-ray player in the future. These flipper discs sound like a good solution to that dilemma, and hopefully they succeed in giving the sagging home video market the jolt it so desperately needs to get studios digging into their catalogs once more!

Read my review of The Bourne Ultimatum here.
Posted by Tanner at 12:38 AM

No Paul Greengrass for Bourne 4 is bad news.
Maybe Doug Liman can do it (again), but the studio will never give him this job...

Not necessarily bad news... I think Gilroy could certainly give us a good Bourne. I think the series is solid enough that it can handle changes behind the camera. Bond did fine without Terrence Young, after all... Then again, of course, there are plenty of bad choices out there, too.