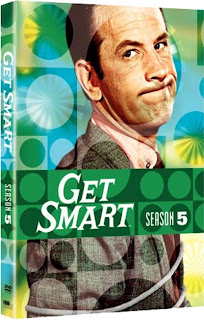 From HBO Home Video comes the fifth and final season of Get Smart, just in time for Christmas. While the massive Time-Life box set was a great package, overflowing with all sorts of cool extras, these single season releases really are one of the best bargains out there on the spy market. With retail only $24.98, the season is currently on sale for just $15.99 at Amazon! That's high value for your dollar. Season 5 remarkably manages to maintain the quality of the previous four seasons, and finds Max and 99 married and expecting twins as KAOS wreaks its usual havoc and Max wreaks even more. The perfect stocking stuffer!
Meanwhile, in England, Network unleashes two impressive spy-related Web Exclusive sets on PAL Region 2 DVD this week. I discussed the pre-Mission Impossible Peter Graves ITC Western Whiplash at length yesterday. This Australian-set adventure series will be of interest to ITC aficionados, and Graves fans will find it essential. 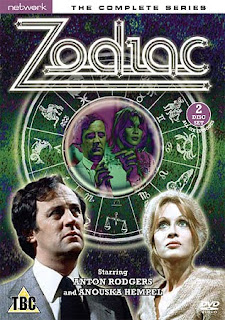 Also out from Network is a series I wouldn't have suspected to be particularly spy-related, but turns out to be of great interest to Avengers fans: Zodiac. This mystery series only lasted for one brief season in 1974, but it was created and largely written by Roger Marshall, one of the primary creative forces behind The Avengers. (The yin to Brian Clemens' yang, perhaps; the two men both contributed immensely to the series we know and love, but rarely saw eye-to-eye.) So what, you say? Marshall was also responsible for The Public Eye, and as awesome as that low-key detective series is, it certainly doesn't have much in common with The Avengers! Well, that's true, and I didn't expect much in that way from Zodiac either, but it turns out to have a great deal in common with The Avengers! Police detective Anton Rodgers (The Prisoner) and talented amateur (in this case, an astrologer) Anouska Hempel (The Persuaders!, Tiffany Jones) very much echo the best aspects of the Steed and Peel relationship. Rodgers, in fact, makes a damn good Steed surrogate (if you can excuse his wretched Seventies fashions and haircut) and sex siren Hempel is a much more credible Peel-type than I would have imagined. The repartee is great, and Avengers fans will definitely want to seek out this rarity. I'll be discussing Zodiac more in the next day or two. Both series are available only through Network's website.
Posted by Tanner at 4:45 PM

FYI -- the first two seasons of Get Smart can be bought as a combination set at Target currently for only $20, which is a ridiculously amazing price.