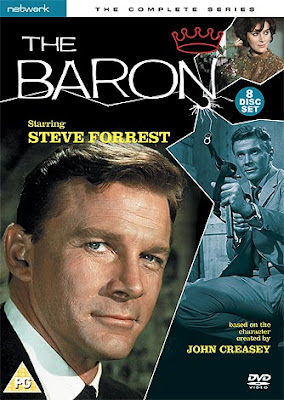 British spy DVD factory Network are having a Christmas sale. Unfortunately, there aren't many of their numerous spy titles included in the sale, but the ones that are are great deals. Mainly, UK readers might be interested to know that The Baron is reduced from £58.72 to just £15.00! Quite a deal. (The set has some good features, but American fans would probably get a better value picking up the Region 1 set from Koch Media, which also boasts some good features. Still, Baron completists, if they're out there, might want both versions, I suppose.) Also on sale is Gerry Anderson's supermarionation puppet spy show, The Secret Service (which includes commentaries from Anderson), available for just £8.00 (down from £24.46). The tangentially spy-related ITC adventure series The Zoo Gang is also on sale for £8.00, instead of £23.31. The sale runs through December 20, or while supplies last.
Posted by Tanner at 6:00 PM

This sale is pretty anemic.

Uhmm, anyone wanting "The Baron" should go for this sale! The Koch Vision set is defective:

First the major problem: the audio of episode #22 "So Dark The Night" on Disc 6 is out-of-synch with the video throughout the entire running time of the episode.

A couple of somewhat lesser problems: the end credits of two other episodes on Disc 6 are TRUNCATED by a couple of seconds; the opening credits of episode #8 "The Persuaders" on Disc 2 are MISSING.

I've written to Koch Vision. They've confirmed the out-of-synch audio...and said they would get back to me. That was the last I heard from them — on September 3rd...

The Baron is a great series. Buy Network's or Umbrella's set instead!

I'm glad I bought the Umbrella set instead of the Koch set. Bullet missed!

Thanks, CK! Yeah, I just saw that last week. And the whole Gordon Scott Collection went on my Christmas list! I was hoping that the Scotts--or at least Greatest Adventure and Magnificent--might get legit special edition releases, but I guess not. At least they're getting Archives!

Thanks for the alert about the Koch problems, Anonymous. I have the Umbrella set, so I didn't end up watching every episode on the Koch one, and didn't catch those things. I'm still pleased that Koch bothered to port Umbrella's special features!

Absolutely! And that is what makes it all the more annoying that the set is faulty!!! (The out-of-synch dialogue on "So Dark The Night" makes the episode utterly unwatchable...)

It's funny to see the set still being sold in Acorn and BBC catalogues and the like. A "This set is faulty" disclaimer would be useful, or do few viewers ever reach episode 22!?

Being a big Georgina Ward fan, her episode "The Persuaders" was the first episode that I watched on the Koch Vision set...thus being immediately alerted to the possibility of other quality issues I proceeded to watch the entire set, despite having bought the Umbrella set ages ago and watched the entire series twice before...

I'm going to start bugging Koch Vision again via email, at any rate before the year is up!!! Hopefully some results will occur, like replacement discs? I'm pessimistic.