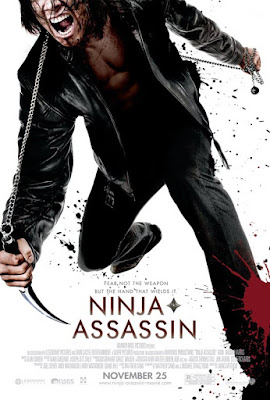 Shot in Berlin for cost-savings reasons (rather than story reasons or location reasons, it’s clear to see), Ninja Assassin is not only a blood-spattered martial arts fest, but also qualifies as the latest entry in the "neo-Eurospy" genre populated mainly by Luc Besson productions. It fills the late November Transporter slot at this year’s box office, but doesn’t come close to matching that series in either quality or fun–let alone the daffy action one craves from such films.

This will be my wishywashiest review since The Pink Panther 2. You see, Ninja Assassin is a really bad movie, but I kind of enjoyed myself. For parts of it. And I can’t really provide a justification for that. So most of what I will write about is what is wrong with it, but there’s some intangible quality (no, "quality" isn’t the right word; let’s just say je ne sais quoi) to the second half of the film. The movie doesn’t really have much of a plot. Then again, a movie called "Ninja Assassin" doesn’t really require much of a plot. It simply requires ninjas and assassinations, and we are given both in the opening moments and then in spades following that. Whatever plot threads there are are exactly the same as in Hitman (2007), so go read my initial review of that movie if you want to know the plot. The short gist: there’s a Europol agent (instead of Interpol, as in Hitman) and his assistant researching some assassinations, including a recent one of a Russian politico. They discover the shred of a clue that an age-old and highly secret cabal of killers who steal children and train them from birth to be assassins might be responsible. Instead of barcoded bald men, though (as in Hitman), these assassins are ninjas. Meanwhile, one of the killers has gone rogue and turned on his cabal. Instead of a lone, charmless dude with a barcode, he’s a lone ninja, named Raizo and played with considerable charm, chiseled torso and remarkably perfect teeth by Korean pop star Rain. If you don’t remember Hitman (and I don’t blame you if you don’t), just believe me: it’s the same exact plot. And, honestly, it’s not much of one. I probably provided more details than the movie itself does; some of that the audience just sort of has to deduce.

The Europol agent is Coupling star Ben Miles, a likable actor who doesn’t really sell the rogue agent persona here. His assistant is Naomie Harris (Pirates of the Caribbean), and though she’s also done good work in the past, she’s equally bland. For the first half of the movie, they investigate, get told not to investigate, and keep investigating. She visits the widow of a KGB agent who previously investigated these ninjas and then died mysteriously when the lights went out. Meanwhile, Raizo fights occasional ninjas. While it’s usually a cool effect when the ninjas actually materialize out of shadow, their "lightning speed movement" effects are absolutely terrible. Director James McTeigue and producers Andy and Larry Wachowski (it’s really hard to believe this film comes from the same creative team behind 2007's truly remarkable V For Vendetta) apparently want to put the inherent coolness of ninjas to the ultimate test, because they do everything in their power to make them less cool. This includes cueing a cacophony of what can only be described as "ninja whispers" every time a room fills up with ninjas. The ninjas whisper in English, and they don’t whisper very cool things. Instead, they say "father" a lot, and seem to have roughly the same vocabulary as the giant whispering snake in the second Harry Potter movie, hissing words like "death" and "kill" without the context of full sentences. You see: they’re really putting the coolness of ninjas to the test!

Whenever the ninjas fight, there is lots of blood. This film revels in abundant bloodletting, but it’s neither campy (as when Sam Raimi does it) nor poetic (as when Quentin Tarantino does it). It’s just there. And, honestly, there was a disturbing part of me that appreciated that, but I do kind of wish they’d used copious buckets of old-fashioned Kensington Gore instead of CGI of a similar color. Either way, it’s kind of cool to see so much fake blood sloshed around in the mass fighting sequences, even if it’s artless. The technique is overused, however, and quickly loses its novelty.

The fights become pretty cool again about halfway through the movie, though, when the ninjas start fighting Europol agents dressed like SHIELD agents in serious body armor and helmets and armed with submachine guns. Needless to say, their body armor is useless against CG ninja weaponry, which flies around willy-nilly, extracting more digital blood, and their guns are nearly useless against the spider-like ninjas. There is never any sense of how many people are actually in any given one of these fights, let alone how many are dying. For all I know, the same anonymous actors were getting up and dying again and again. And when that thought struck me, I started to enjoy the movie more. It has a weirdness reminiscent of the Jennifer Garner Marvel superhero vehicle Elektra, and like that movie can be better appreciated if viewed as if you’re watching a twenty-fifth anniversary screening of some obscure cult movie at your favorite revival house. Ninja Assassin isn’t a great or original movie for today, but it would be pretty sweet for the 80s ninja heyday–when mass fights also featured the same guys getting up and dying again over and over.

There’s a ninja car chase that also won me over, where ninjas pursue Rain and Harris into traffic, and fight in the middle of the street amidst speeding vehicles. At the end of the day, Harris’ car is riddled with throwing stars, which is a neat (if brief) visual.

Eventually, Europol manages to pursue the ninjas to their ninja factory where they hang out. Since the rest of the movie takes place in Berlin (an obvious location for a ninja movie, right?), I thought for a moment (based on the speed with which Europol showed up in Humvees–and the fact that Europol was even there, en masse, since they presumably don’t have jurisdiction in Asia) that the ninja factor turned out to be in the mountains outside Berlin. How weird would that be? But I think it is somewhere in Asia (appropriate for its Eastern design and bonsai gardens). The final fight is cool. I liked it. It’s not particularly well-staged, but it invokes all the right cliches. I appreciated that the filmmakers managed to create enough fire that Rain’s final fight with his former mentor takes place amidst flames and falling, burning timber, as it should. I also enjoyed the whole ninjas-versus-modern-military-might melee, which reminded me a bit of the end of The Face of Fu Manchu.

From a neo-Eurospy perspective, Ninja Assassin is a failure. Like Hitman and the Transporter films, it’s got gonzo, low-budget action and it’s shot in cheap but exotic (to American audiences) European locations. Unlike those movies, though, it doesn’t take advantage of those locations at all–which is a key to the Eurospy genre, neo or not. Berlin might as well be doubling for New York or any other city for all they show of the city. (We do get to hear snippets of David Bowie’s "Heroes" playing in a laundromat early on, though, to establish the Berlin mood, and that was cool.) Furthermore, Ninja Assassin is totally lacking the "babe" quotient of those other neo-Eurospy entries. Sure, Naomie Harris is attractive, but for better or worse, she's not presented as a "Eurospy babe."

One area that really impressed me, though, was the score. Ilan Eshkeri (Layer Cake) provides lush instrumentals to accompany the suspense, with tinges of electronica kicking in on the action cues. The effect is somewhat reminiscent of David Arnold, and I liked it. If there’s a score CD available, I’ll be buying it. (Huh. There is, but it seems to only be available on burnt-to-order CD-R. Weird!)

Overall, I can’t possibly recommend Ninja Assassin. In fact, I should tell you not to see it; you probably won’t like it, even if you think you will. But if there’s some part of you that’s into that notion of pretending like you’re watching a cult movie from the 80s (and not even a particularly good one, just a slightly interesting one), you might get a kick out of it. That’s the best I can articulate the otherwise inexplicable enjoyment I derived from the film’s second half. It’s not good, but I kind of liked it. You know that recent line of Hasbro Marvel action figures with all the SHIELD agents in two-packs with Hand ninjas? The line was marketed as "Ninjas Vs. Superspies." And the movie Ninja Assassin offers enough for that concept to make it slightly enjoyable. (But not enough to be truly satisfying.)

Wow, I can’t believe I ended up writing that much about Ninja Assassin. Those are more words than the film deserves to have written about it.
Posted by Tanner at 11:41 PM

Well, since the AMERICAN NINJA series is among my favorite "guilty pleasures" (tho I'm actually rather guiltless with my pleasures)I'll certainly give this one a Netflix rental.

And I want to check it out just to see Sho Kosugi's return to the screen...

Sho Kosugi was cool. When he finally gets his fight scene, that's when they invoke all the right 80s ninja movie cliches and it made me happy.

I have many pleasures that lots of people would call guilty, but I don't consider them that. This one I really did!

Seems odd to me that you'd shoot a movie in Berlin for cost-saving reasons - the Euro is pretty strong and Germany isn't exactly a low wage country.