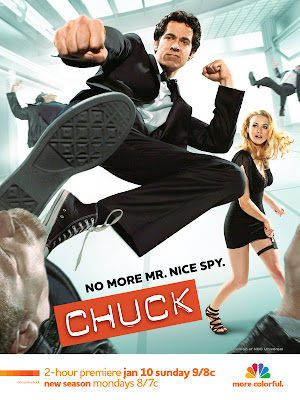 Were it not for the fact that his shoes are clearly Converse (albeit with their trademark stars removed), one could be forgiven for looking at this new poster for the third season of Chuck and thinking it was one of those Sketchers ads from a few years ago. It's basically the same. I don't like it. I greatly preferred cool illustrated image we saw last summer. Or Season Two's clever For Your Eyes Only-inspired campaign. Oh well, whatever the image, the good news is that Chuck is back. As it says beneath the prominent Chuck Taylors, Chuck returns Sunday, January 10 with a two-hour season premiere. This image first surfaced on The Hollywood Reporter's The Live Feed blog.
Posted by Tanner at 12:14 AM

The pose is similar to Jackie Chan's The Tuxedo.

I have to agree - terrible poster and I initially thought this was a new converse ad.