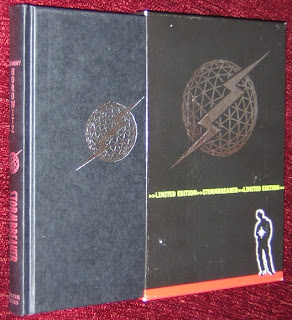 While Charlie Higson's Young Bond novels are highly collectible thanks to the obvious, built-in audience of James Bond collectors, Anthony Horowitz's Alex Rider books have sparked less of a collector's market.  That's certainly not to say that they aren't collectable, just that they inspire less of a mania than a nearly six-decade-old franchise like 007.  Like the Young Bond books, the early books in the Alex Rider series were first published only in paperback in their country of origin, and pristine copies of these first editions are rare and fetch a decent amount on Ebay.  As with any series, the first book, Stormbreaker, is the most sought after, and the most collectible editions (judging by the exorbitant prices on Bookfinder.com) seem to be the American hardcover first edition (which was the only hardcover first, and had a small print run) and a slipcased, limited edition hardcover put out in 2005 by Walker Books in the UK.  While the first four Young Bonds have all been published in similar slipcased editions, to date Stormbreaker is (sadly) the only Alex Rider novel to receive this deluxe treatment.  There's very little information about this edition available on the web, so it seems like a good candidate for my occasional series, "Judging a Book By its Cover," in which I do exactly what the age-old adage cautions against and evaluate books based on their physical characteristics alone.

Starting on the outside, the slipcase itself is kind of ugly.  It's a flimsier cardboard than the Young Bond limited edition slipcases, and the lime green text across the front declaring ">> LIMITED EDITION >> STORMBREAKER << LIMITED EDITION" in a digital font (designed to look like the readout on a computer screen) isn't pretty.  The silver embossed Stormbreaker logo, however, with a lightning bolt through a globe, is cool.  The red bottom of the case is marred by a giant barcode, the original £20 price mark, and the assertion that "This special limited edition has been signed and numbered by the author."  Personally, I prefer it when barcodes and prices for limited editions come on a removable sticker outside the shrinkwrap rather than printed on the slipcase.  This edition was originally sold with an ugly cardboard band that wrapped around the book further emphasizing the fact that it was a limited edition.  While the collector in me couldn't reconcile throwing it away, I did remove the band for reasons or aesthetics and convenience of accessability. 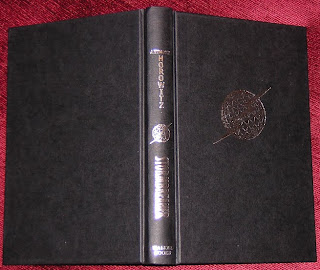 Inside the slipcase is a different story.  The book itself is very handsome indeed, with black boards and black endpapers.  There is no dust jacket.  The embossed silver logo appears again on the front cover and on the spine.  It and the letters in the author's name are presented in a subtler "digital" font that can really only be discerened by close scrutiny.  It works much better than the text on the slipcase.  The size of the book, the texture of the boards, the gilt embossment and the letters in Horowitz's name on the spine distinctly remind me of the Jonathan Cape Ian Fleming first editions.  The lettering isn't the same, mind you; it just reminds me of that.  And that's a good thing.  It's a nice looking book.  Unfortunately, it's bound with glue (the prevalent British preference of the moment, also afflicting the Young Bond limited editions) rather than sewn, but oh well.  That's hardly detremental.

The copyright page reads "First published 2000 by Walker Books Ltd," then adds "This special limited edition published 2005."  The signature page is the first one after the endpaper, coming before the title page or copyright information.  The edition is limited to 750, and signed by Anthony Horowitz in blue ink. 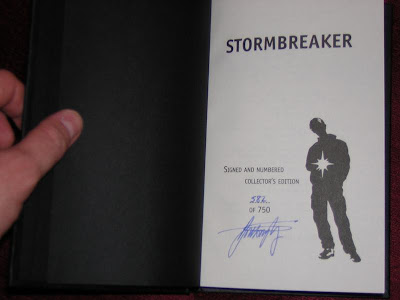 The book fits snugly into the slipcase, but not so snug that it becomes a challenge to remove it, an annoying factor affecting some of the Young Bond limited editions. 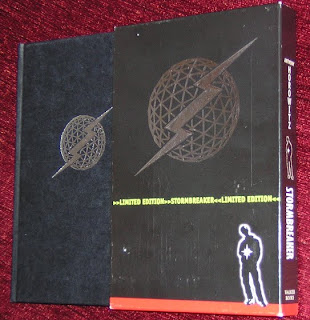 All in all, the Stormbreaker Limited Edition is a very handsome volume packed in a slightly less handsome slipcase.  A crucial cornerstone of the series, it's certainly worth seeking out for Alex Rider and spy fiction collectors.  And as Alex Rider is one of the most influential spy series currently being published, it will only appreciate in value. I wish there were more Alex Rider limited editions.

I just finished the second Young Bond book, Blood Fever. It was very good, but I did get tired of James never being able to rescue himself -- whenever he was in danger the resolution was never through Bond's ingenuity, it was always solved by someone or something turning up at the very last second.