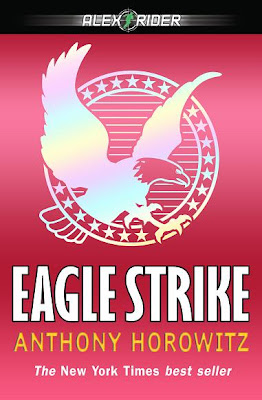 Skeleton Key, the third book in the Alex Rider teen spy series, left me a bit cold. In fact, after tearing through the first two books, Skeleton Key slowed me down so considerably that it put a halt to my initial Alex Rider kick. I’ll discuss my issues with that book another time, though. When I finally resumed the series, more than a year later, I found the next book, Eagle Strike

, to be a real return to form. In fact, it was (and still remains) the most enjoyable Alex Rider book I’d read yet.

Once again, author Anthony Horowitz turns to Ian Fleming for inspiration, but this time he refrains from retelling a single story wholesale as he did with Moonraker in Stormbreaker and OHMSS in Point Blanc. This time he happily borrows piecemeal from Goldfinger, Doctor No and other sources, cobbling sequences together (along with plenty of wholly original ones) to suit his own story, a strategy that works very well for Alex Rider. And, as in the first two books, the sequences that are lifted from Fleming are reworked and updated appropriately (and skillfully) for a modern Young Adult audience.

Eagle Strike begins with Alex on a well deserved and much needed holiday in the South of France. He’s tagging along with the family of his friend Sabina Pleasure, first introduced in the early chapters of Skeleton Key. Sabina’s father, Edward Pleasure, is a journalist who’s rented a cottage in order to do some work on a big article he’s writing. While he works, Sabina and Alex spend most of their time at the beach or exploring the coastline. On one such outing, however, Alex spots an old enemy: professional assassin-for-hire Yassen Gregorovich. It was Yassen who killed his uncle, spy Ian Rider, and Yassen who aided Herod Sayle, the first evil mastermind Alex faced. Alex is certain he’s up to no good, so he follows him. It’s a great representative sequence from the series, because it combines so well all the best ingredients of good, escapist spy fiction: the right setting, the right characters, exciting tradecraft and excellent suspense. Alex weaves through the tony Mediterranean seaside town following his quarry, then ducks into an upscale café. But Yassen comes into the same café to take a phone call in private! Alex hides, and overhears some crucial bits to get the plot moving. And, of course, Yassen suddenly seems to sense his presence. The suspense ratchets up.

Desperate to leave his spy life behind him, Alex ultimately (and with some difficulty) decides to turn his back on Yassen. It’s not his job to find out what he’s up to. This, of course, backfires terribly. The cottage where the Pleasures are staying blows up, and Edward is badly injured. The authorities say it was a gas main, but Alex knows the truth. It was Yassen. It had to be. And if Alex had acted on his instincts sooner, he could have prevented this tragedy. He blames himself, and he goes after Yassen on his own. He sneaks onto his yacht, determined to assassinate the assassin. Of course, when the moment comes, he can’t pull the trigger. Alex isn’t cold-blooded. This gets him caught. Somehow, though, Yassen is reluctant to kill Alex, even though he’s never shown any hesitation about killing before. Instead, he engineers a death trap the teen is unlikely to escape... but Yassen seems to know he will. The unlikely deathtrap involves dressing Alex up as a matador and unleashing him, with no training or experience, into the ring during a major bullfight. It’s ludicrous and improbable... and perfect. Not only does it (probably inadvertently) recall the great sequence in Fathom in which Raquel Welch finds herself in similar, but it’s just a great spy deathtrap.

From the whole excellent opening in the South of France, the plot proceeds apace with other Riders and, of course, with Bond. All the boxes are checked. Alex has his briefing with MI6, though this time they don’t believe him. He’s on his own, forced to go rogue. He meets the villain, rock star/philanthropist/entrepreneur Damien Cray, at a very fancy private party, and engages with him in a game of skill. Cray, true to his kind, cheats. The game of skill, however, is not baccarat, but a new video game for a new game system being launched by Cray’s company. True, James Bond has played video games as well, in Never Say Never Again and John Gardner’s Role of Honor, but whereas for Bond it’s cool because it’s out of place, for a teenager like Alex, it’s cool because it’s entirely appropriate! Perfect, in fact. Horowitz describes the action in the fictional game with the same skill that Ian Fleming wrote about card games. Personally, I hate sitting around watching other people play video games, but I was entertained reading Horowitz’s description.

The video game pays off later in the book, in a sequence that nods (rather vigorously) to Fleming’s Doctor No. Cray has a pain maze, just like the good doctor, and it’s accessed in the exact same manner. As soon as Alex realized that he could escape from his prison cell through a small passage, I knew what was coming. This has its plusses and minuses. On the downside, there are many moments in Alex Rider books in which readers familiar with Fleming know exactly what comes next. But speaking for myself, that makes me smile. I settle in and turn the page, eager to see what unique twist Horowitz adds to a situation with which I am already familiar. Once again, this practice does raise the concern that these books might be spoiling Fleming for young readers, but going in the other direction, I enjoy the references.

After facing the same initial obstacles that Bond endured, Alex doesn’t find himself sharing a tank with a giant squid (pity); instead he finds himself trapped inside a real life version of the very video game he played earlier. Apparently Cray developed his game’s unique "pain synthesis" by, er, synthesizing actual people’s pain. The game and the obstacle course have an Aztec theme, which is a rather strange parallel to Charlie Higson’s Young Bond novel Hurricane Gold (published four years later), in which Young Bond endures similar torment with a Mayan twist. Higson was also referencing Doctor No, but it’s an odd coincidence that both Young Adult writers should introduce the same peculiar South American Indian element that doesn't come from Fleming!

The other primary Fleming scene that Horowitz utilizes in Eagle Strike is Bond’s reconnaissance of and subsequent break-in to Goldfinger’s Geneva complex. Alex’s actions at Cray’s Dutch factory compound, where he makes his game system, very much mirror those scenes. Instead of a gadget-laden Aston Martin, Alex has a gadget-laden bicycle at his disposal, courtesy of the corpulent Smithers, his very own Q. (Unsurprisingly, the gadgets on Alex’s bike more closely echo the movie’s DB5 with ejector seat–natch!–than the book’s DBIII with its rather less spectacular dimming, color-changing taillights.) His break-in and escape are both exciting, as is that real-life video game that comes in between. But the best is yet to come in a terrific chase scene (reminiscent of Bond and Tracy’s escape in the film version of On Her Majesty’s Secret Service) in which Alex’s bike is pursued by Porsches and motorcycles. This is yet another scene that epitomizes the appeal of the Alex Rider novels. Isn’t a gadget-laden bike what every schoolboy dreams of? I know I did. I can’t remember how many times I pretended my bike had Bond-like gadgets (or tried to create some with varying success) and fantasized about using it to elude thugs. And Alex does exactly that. It’s the same escapist appeal as James Bond, but on young reader’s exact level. What they dream, Alex does. Hence the unlimited appeal of the series.

The only real drawback to Eagle Strike is the villain, Cray. The idea of a rock star villain is a great one, but Horowitz doesn’t really take advantage of it. Cray’s biography will thoroughly amuse music fans, who will recognize chunks borrowed from the lives of David Bowie, Bono, Bob Geldof, a dash of Mick Jagger and even the band Slade. But that’s all in the past. We never get to see Cray being–or behaving like–an actual rock star. Instead, he’s focused on charities and his Richard Bransonesqe role as an entrepreneur. It seems like a wasted opportunity to have had a lot of fun with a maniacal rock star. That said, the focus on the charity side of some of those stars is well done. The idea of a philanthropist gone too far, from wanting to make a difference in the world to wanting to reshape the world in his own image, is a good one. Bono or Geldof gone utterly bonkers.

Sabina is roped back into the plot when Cray eventually kidnaps her as a means of getting at Alex. Once again, that’s ideal childhood escapism. Because ultimately there would be no point for a kid in accomplishing all the things that Alex does if you couldn’t tell people about it. When he first tries to prove to Sabina that he’s a spy by taking her to the bank that MI6 uses as a cover, things go badly. SIS keeps their cover intact, and Sabina doesn’t believe him. So even though it’s bad news that she gets kidnapped, it will come as a relief to young readers that she finally has to believe him. The "I told you so" moment is crucial to any child’s wish fulfillment.

Things build to a very exciting conclusion that not only hits all the right notes for the action-packed finale to an exciting spy novel, but also manages to reveal personal secrets about Alex’s past–and a possible path to his future. Revelations involving his father (no, it's not Yassen, though he plays a role here) not only trade on Harry Potter beats–not to mention a rich, much older, mythic tradition–but also lend that final little bit of requisite childhood wish fulfilment: your parents are (or were) really much more exciting than you thought. Eagle Strike works superbly as both a spy novel sure to appeal to any fan of the genre and a masterful piece of Young Adult escapism, a full-bodied addition to a revived and thriving market. In other words, it’s a publisher’s dream: something bound to appeal in equal measure to fans of Harry Potter and James Bond.

If you’re interested enough to invest in the whole series, by all means begin at the beginning with Stormbreaker. But if you think you only want to try one Alex Rider novel, Eagle Strike