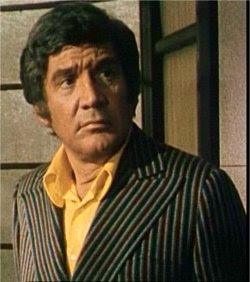 I just heard on the radio that Gene Barry died today, and it hit me pretty hard. Which is a bit surprising, because I wasn't introduced to Barry through his more esteemed work, like War of the Worlds (as Dr. Clayton Forrester, a name later co-opted by Mystery Science Theater 3000), Bat Masterson or Burke's Law. Or through his well-received stage work, including the original Broadway run of "La Cage Aux Folles." I was introduced to Barry through what must be his worst show (and probably one of the all-time worst television shows period), ITC's The Adventurer. On The Adventurer, Barry played the most loathsome "hero" ever, Gene Bradley, an international movie star who moonlights as a secret agent. Bradley is so full of himself and such a big jerk that you actually root against him. And, from the excellent interviews included on Network's DVD release of the series, it doesn't seem like Barry was exactly in on the joke. In fact, none of his co-stars (including Catherine Schell, Stuart Damon and the late Barry Morse) have anything nice to say about him. By all accounts, he behaved just as badly off screen, treating them all badly and getting them fired one by one for being taller than he was.

Despite having some of ITC's best talent behind the scenes (Monty Berman, Brian Clemens, Val Guest and more), The Adventurer is probably the company's very worst show from all production standpoints. But, oddly, it also might be their most entertaining! Gene Barry has given my girlfriend and me so many hours of joy watching this series, and that's why his death is hitting me so hard. This website features a hilariously in-depth episode guide to the show, with plenty of screen captures (including the one I borrowed above) highlighting all of Gene's terrible Seventies fashions and choice quotes from the show. Kinggodzillak's writing on the site is funny enough that it can be enjoyed without ever having seen an episode, but it really serves as an essential companion to the DVDs. We always read about an episode there right after we watch it, and rarely have I laughed as hard as I do at the comments on the site. And none of it would have been possible without Gene Barry.

I doubt he'd like the idea of being remembered for The Adventurer (he refused to contribute to the bonus material on the DVD), but the fact is, it's an indelible contribution to popular culture that we wouldn't have were it not for Gene Barry. He makes the show. And, for that reason, the world is a much sadder place to me without Gene Barry in it. Although The Adventurer gets mentioned briefly in both the New York Times and LA Times obituaries, I'm sure very few people will remember Gene Barry for that. But to those who do, one of the episode titles rings particularly true: "Icons Are Forever."

Of course, Barry's Adventurer co-stars probably caught him at his worse: a washed-up American star (prior to his Broadway comeback) stuck in a low-budget British series shooting in Europe. To others, I'm sure he's remembered much more fondly. His children share some lovely remembrances about him in those two obituaries. And he made many more contributions to the spy genre, too, some of which have fared much better than The Adventurer over the years. Among those are the Eurospy movies Moroc 7 and Subterfuge, the TV series that gave birth to Honey West, Burke's Law and its later, Bond-inspired format, Amos Burke, Secret Agent, and the rotating hero adventure show The Name of the Game, which had many spyish episodes.

Gene Barry died at the age of 90 today in Woodland Hills, California. For a more conventional obituary and a great overview of Barry's career, be sure to check out the New York Times. For more on The Adventurer, please poke around that episode guide I mentioned. I've been meaning to write about that site for quite some time, and I'm sorry it was such a sad event that caused me to finally do so. Personally, I can say very honestly that few spy stars have given me as much sheer enjoyment as Barry has. While it may not be for the reasons that he intended, The Adventurer is absolutely essential viewing for fans of the genre.
Posted by Tanner at 12:35 PM

When a scene in the episode Fox and the Wolf? in the series Crazy Like A Fox was being shot in the plaza of 101 California Street in San Francisco I was working on the other side of the street at 50 California.  While walking by I stopped to watch the shoot and still being pretty young and having just moved to San Francisco I was a little dazzled to see being filmed what I knew I'd eventually watch on the small screen.  As I looked around I saw a man standing alone in the center of the plaza smoking a cigarette.   I'm a bit embarrassed to write this but my heart jumped when I realized it was Gene Barry, elegant as always, looking back at me with a wry smile.   I wanted to tell him he was special to me.  That watching The War of the Worlds was a significant event when I was ten year old.   But I knew I'd never make it across the thirty yards that separated us without being intercepted by security.   Then an idea jumped to mind.  I'd wave my arm high and call out loudly "Sylvia!  Sylvia!" as he did some thirty year previously towards the end of the movie while looking for Ann Robinson who he knew would have sought shelter in a church.  I think he sensed I was about to say something as he cocked his head slightly to one side with a questioning but still amused expression on his face.  Unfortunately due to a lack of balls that I regret to this day I couldn't do it.  The moment passed, the shoot continued and I walked away.  Objectively it's a trivial thing but there is some truth in the old adage that the sting of regret is as sharp for the things we didn't do as for those we wish we hadn't done.

Thank you so much for your lovely comments on my Adventurer episode guide! Had a lot of fun putting that together, so it's great to hear people enjoyed it. :)

The guide's been offline for the last five years, but I've just finished re-uploading all 26 episodes to my new site. Every dodgy outfit and awful fight scene. It's all here to thrill a new generation. :)

Chris Dale! Thank you SO much for stopping by and sharing that link! I have searched for a way to get in touch with you since your old site went down, and searched in vain hoping that you'd put up your episode guide somewhere else. Seriously, I LOVE your reviews of this show, and not having them to read after watching an episode definitely takes some of the fun out of the DVDs. So I am elated to hear that it's back up! I will update the link on my main page as soon as I have a moment. Thanks again!

Mike, Chris's new comment here served as a reminder that I never replied to yours all those years ago. Thanks for sharing that anecdote! Personal remembrances--even from afar--are the best kind, and that's a really great story.