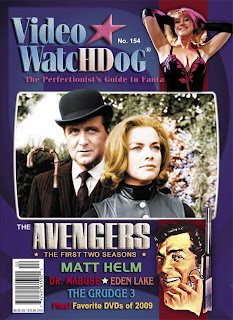 The next issue of Video Watchdog Magazine has plenty to offer for spy fans!  Tim Lucas has posted the cover of issue 154 on his blog, and it's, frankly, irresistable.  The issue covers the new Optimum Entertainment Region 2 release of The Avengers' second season (and the few suriviving episodes of the first).  This remastered special edition, loaded with bonus features, is one of the major, major spy DVD releases of the year, and to my shame I haven't covered at all yet.  It caught me by surprise in the fall and I've probably got several unfinished posts about it and one day I'll finish one of them, but in the mean time pick up this issue of Video Watchdog.  I'm sure you couldn't hope for more in-depth coverage than Kim Newman provides.  (Personally, I can't wait to read it!)  Furthermore, this issue also examines the Matt Helm movies and the recent Region 1 release of the obscure Sixties Japanese spy film 3 Seconds Before Explosion

(yet another one I've been meaning to post a review of but haven't had the chance).  On top of all that and totally un-spy-related (but of great interest to me) it also covers Bob Dylan's epic 1970s film Renaldo and Clara, filmed on his amazing Rolling Thunder Tour.  I watched all four plus self-indulgent hours once on crappy bootleg VHS while I was home sick, and found it to be a unique and rewarding experience.  (Granted, it helps to be a huge Dylan fan, and it probably also helped to be running a high fever.)  Anyway, Dylan aside, there are more than enough reasons for spy fans to pick up this issue of the best cult movie/home video magazine out there!  It hits newsstands January 2.
Posted by Tanner at 5:18 PM