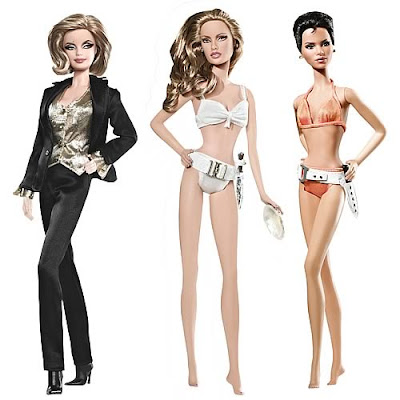 This is pretty cool. The ever-vigilant Bish at Bish's Beat has spotted a new James Bond toy: Bond Girl Barbie dolls. Three Bond Girls are recreated in plastic: Pussy Galore (Honor Blackman), Honeychile Rider (Ursula Andress) and Jinx (Halle Berry). The outfits look good and the hair is nice, but I'm not crazy about either of the bikini bodies. The Halle Berry doll looks emaciated! Maybe it's because of the disproportionately huge heads, but the bodies look small. Was there a PC-motivated change to Barbie bodies recently? These dolls don't seem as, ahem, full-figured as the old ones. If so, Halle Berry and Ursula Andress are the wrong figures to change the measurements on! The could probably pull off real-life Barbie proportions.
Honey fares a little bit better than Jinx thanks to her fuller hair, but both Bond Girls look like three-dimensional stick figures, which is too bad. I do get a kick out of Honey's lack of a belly button, however. It reminds me of the DC Showcase Dr. No comic book, which also omitted a belly button from Andress' likeness since belly buttons apparently offended the censors of the time! Pussy Galore actually fares quite well in the conversion to plastic. And not just because she's wearing clothes; her hair is also spot-on. The face doesn't look much like Blackman, but I like the look nonetheless.

All three dolls are certainly superior to the old Exclusive Premiere figures, though Berry's Sideshow likeness was better than this. This Pussy is more glamorous than her slightly masculine looking Sideshow counterpart, but the face on that one looked more like Honor.
These dolls aren't the first Barbie Bond Girls. In 2002, there was a release of Ken and Barbie as James Bond and a generic Bond Girl. The big deal with that set was that Barbie-as-Bond-Girl's dress was an original by EON costume designer Lindy Hemming, and it looked pretty cool. Barbie's garter holster housed a cell phone instead of a gun. At least these new, movie-specific Bond Girl Barbies are allowed to carry actual weapons!

You can order the set of all three new dolls here.
Posted by Tanner at 6:31 PM

While this is kinda cool, spindly bodies notwithstanding, why now? Why not during the 40th anniversary or when a new film is out?

Really cool Barbie Dolls. I love them all.