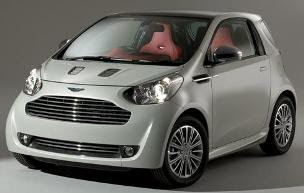 It's always a pleasant surprise to see James Bond in unexpected places.  The front page of Yahoo! was such an unexpected place, being as there's no new movie on the immediate horizon or new actor being cast in the role or anything like that.  But Yahoo! used a picture from the Casino Royale press junket of Daniel Craig standing in front of Bond's DBS to illustrate a news story about a very different kind of Aston Martin: the new mini-car, the Aston Martin Sygnet.  (Have they abandoned all sense of tradition?  Shouldn't that have been Vygnet?)  It's a basically a luxury version of the Toyota iQ, but with Aston Martin styling, including the company's signature grille.  It's only the styling, unfortunately; the car is thought to retain the Toyota's 1.3-liter four-cylinder engine.  That's too bad, because Aston Martin didn't used to be about luxury as much as performance.  This stunt seems like more like a Jaguar or Mercedes move. Just imagine how zippy that little thing would be with a powerful Vanquish engine in it!  There would be no keeping it on the ground.  Oh well.  At least this means there will be one Aston on the market that regular people can afford, at just $32,000.  (Er, still not exactly a bargain for the size...)

The Yahoo! article, furnished by U.S. News & World Report, naturally makes Bond jokes.  "How can James Bond recover the control disk for the dual GoldenEye satellite weapons driving something like this?" wonders the author.  Well, that's because he's not thinking creatively.  While I wouldn't want to see a Cygnet become 007's primary mode of transportation, I feel like Purvis and Wade must be salivating at the possibilities this little package affords!  Just imagine that thing turning into a mini-sub or getting a Man With the Golden Gun-style wing fixture affixed to it!  I can picture a great chase sequence built around this thing.  I guess it all feels more Roger Moore than Daniel Craig, but personally I wouldn't mind seeing this little car pop up in a Bond film...
Posted by Tanner at 5:28 PM

I'M WITH YOU ~ IT WOULD BE TOTALLY COOL TO SEE THIS BABY IN A SEQUENCE IN THE NEXT BOND FILM! TOO FUNNY!

How the once-great have fallen! Is it any wonder I rarely venture outside the 1960s?