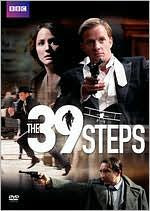 The latest filmed adaptation of John Buchan's classic spy novel The 39 Steps will be all new to American audiences when it debuts on DVD this March, courtesy of BBC Home Video. British audiences are probably already familiar with it, as it aired on UK television last Christmas and is already available on DVD there. Rupert Penry-Jones, known to spy fans as Adam Carter on MI-5 (aka Spooks), steps into the role of Richard Hannay in this retelling. Lydia Leonard and Patrick Malahide co-star.

The 39 Steps has been filmed at least three times previously. It's unsurprising that Alfred Hitchcock was the first to make it, as it features his favorite theme of an ordinary man suddenly pulled into a world of espionage and deception–and of course a chase. Ralph Thomas and Betty Box (Deadlier Than the Male) made a very entertaining if obscure version starring Kenneth More in 1959, and Avengers and Callan director Don Sharp made one in 1978 starring Robert Powell, who reprised the lead role a decade later on the TV series Hannay. A few years ago Robert Towne was rumored to be developing a new big-screen adaptation, but that project seems to have run out of steam. Most recently, the story was adapted for the stage in a comedic Broadway production. The Hitchcock version is available on DVD from Criterion, and was recently reissued in a budget no-frills edition that maintains the same excellent transfer at a lower price as part of the company's "Essential Art House" line. Neither of the other versions is available in America, but both (1959 and 1978) are out on Region 2 discs in England, as is Hannay.
The new TV version with Penry-Jones is, of course, updated for modern audiences, but retains the book's 1914 setting. According to producer Lynn Horsford, "With this adaptation we wanted to stay faithful to the spirit and period of the book, but asked the writer to feel free to re-imagine it for a modern audience more familiar with James Bond and Jason Bourne." The latest incarnation of The 39 Steps hits stores on March 2, 2010. Retail is $19.98, but of course it's cheaper on Amazon.
Posted by Tanner at 12:46 PM

The 39 Steps has always been a favourite of mine, and this version is excellent!

Probably closer to the original book than any of the other films (although it does have some big differences), I would highly recommend it to fans of Buchan.

I would love to see the BBC follow it up with adaptions of some of Buchan's other Hannay stories, especially Greenmantle or The Three Hostages.