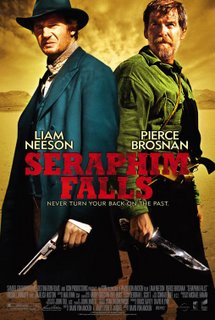 Brosnan's Still Got It

Years and years ago, when Timothy Dalton was James Bond and blogs were still undreampt of, I remember flipping through a People Magazine "50 Most Beautiful" issue and there was Pierce Brosnan with the headline, "Oh what a mighty might-have-been." The meager chunk of text recounted the oft-told, familiar story of how he was almost James Bond, only to lose out to Tim when NBC un-cancelled Remington Steele and held him to his contract. Without 007, he'd ended up banished to the realm of USA movies of the week like Murder 101. Fortunately for Pierce, he got the rare second chance, he got to be Bond, and the revived the franchise. And then he was rather unceremoniously dumped in favor of the younger model.

Well, we all know now that worked out fine for 007, but how did it work out for Brosnan? Not bad, as it turns out. Last year he got a Golden Globe nomination for one of the best performances of his career in The Matador, and this year he's made another good movie, Seraphim Falls. We all knew he was filming it since he did loads of talk shows last year with that weird beard, but now that it's in theatres, there's no publicity whatsoever, which is too bad.

David Von Ancken's Seraphim Falls is a beautifully shot (by cinematographer John Toll) western in the Sam Peckinpah vein, a man-on-the-run adventure that turns surreal as it moves out of the mountains and into the desert. Liam Neeson plays the remorseless, single-minded leader of a posse pursuing Brosnan's character. The film begins mid-chase, and doesn't let us know why Brosnan's on the run for quite some time, which worked well for me. There are moments of brutal violence, and plenty of exciting escapes, but like Pat Garrett and Billy the Kid or Once Upon A Time In the West, there are also quiet, medatative moments, and dream-like encounters with unique characters. In the very end the movie may get a little too surreal for some tastes, but the journey getting there is one well worth taking if you're a fan of the genre or a fan of Brosnan. He may lack a Daniel Craig-like physique (as he demonstrates in some shirtless scenes), but he's still a hell of an actor, and still getting better with every role. Hopefully becoming un-Bonded will open up even more interesting parts in his future.

Brosnan recently announced he would be starring in and co-producing a movie about high-stakes gambling currently saddled with the astoundingly forgettable title "The Big Biazarro." (Hopefully that will change.) According to Variety, "Brosnan will play an elusive veteran card player who mentors a headstrong but talented protege." Can I make a suggestion for the role of the protege? How about Daniel Craig? I'd pay to see that!

After that, he's still got his Thomas Crown sequel in the pipeline, currently titled The Topkapi Affair, and incorporating elements of Jules Dassin's classic 1964 heist flick Topkapi and the Eric Ambler book upon which it was based. Brosnan recently said that Rene Russo will not be in it, which is too bad if y 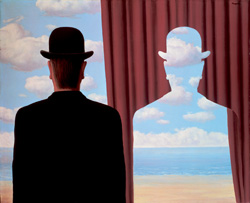 ou ask me. She was as much responsible for the success of the first movie as he was! Oh well. Speaking of The Thomas Crown Affair, I checked out the Magritte exhibit at LACMA today. Surprisingly (but appropriately), Brosnan narrates the audio tour! And, naturally, makes reference to the crucial role Magritte played in that movie.

So Pierce is keeping busy post-007, and in no risk of returning to that "mighty might-have-been" status People so cruelly hung on him all those years ago.
Posted by Tanner at 1:17 AM